Dear god, was it really over twenty years ago that I first noticed Gary Daniels, playing a henchmen in Jackie Chan’s City Hunter? Of course, that wasn’t just your average henchman; he took on Jackie in a fantasy sequence, during which Daniels turned into various characters from Street Fighter II. It was extremely dumb, but entirely deliberately so, and I laughed like a drain. Since then, I’ve always had a soft-spot for him, through all his career up and downs. Let’s face it, even as his now well into his fifties, he’s still likely the nearest thing Britain can offer to a martial-arts action hero.

The quality of his movies is generally determined by the amount of arse-kicking Daniels gets to do, because that’s where his skills mostly lie. When required to emote, he’s on decidedly shakier ground; I say this in no particular tone of judgment, and he’s no worse there than the Van Dammes and Segals of the cinema world, when it comes to thespian abilities. It’s more a case of knowing your limitations and working within them. This film offers both ends of the Daniels spectrum: it has significant amounts of bone-crunching action, yet also contains efforts at creating an angst-ridden hitman character – which don’t work, to such an extent they actively detract from the bits that do. 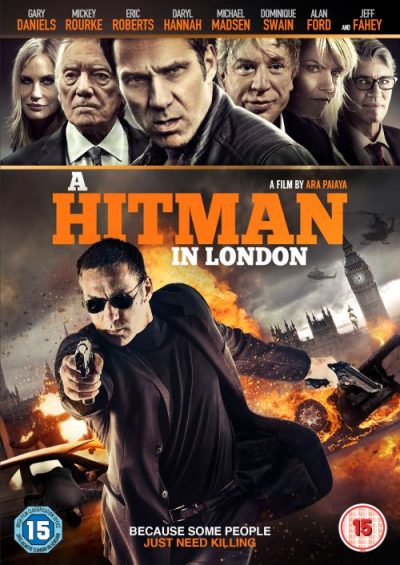 There are also a host of bigger-name players in supporting and/or cameo roles, and these are equally a mixed blessing. I’m sure they help sell the film to distributors, and then on to viewers, but they also burden the film with expectations it doesn’t fulfill, not least because a good chunk of them are largely irrelevant. Mickey Rourke, for example, is wheeled on at the beginning and end, and looks so startlingly uninterested in proceedings, his entire contribution should have been left on the cutting-room floor. A Comic Sans caption would have delivered a more convincing performance. Almost as problematic are the good ones: Alan Bond, for example, steals the entire movie with his single scene, but this performance just highlights the acting deficiencies elsewhere.

Plotwise, what you get focuses on assassin for hire Bradley (Daniels), who quits his job after a contract goes wrong, resulting in the death of an innocent girl. Vanishing off the grid to a house in a down-market bit of London, he’s dragged back into proceedings after rescuing prostitute Anna Peel (Swain) from her Russian pimp. She’s looking for her sister, abducted by the same sex trafficking gang, and Bradley agrees to help her, seeking redemption for his sins. However, this brings him back on the radar, and to the attention of his former employer, known only as The Executive (Roberts),. as well as the gang, led by The Boss (Michael Madsen) – yeah, it does feel like the script couldn’t be bothered to come up with actual names for people. They both send a stream of minions to stop Bradley, with the results being exactly what you would expect.

That’s where the film works, even if the production values are all over the place. Some scenes look really slickly shot, and there’s some expensive-looking aerial photography; the next, a “brothel” consists of a house with sheets hung from the ceiling, and there’s a truly horrendous bit of CGI with a car driving “through” a gate. Daniels is entirely oblivious to it all, sending the extras crashing into, through and over whatever happens to be conveniently at hand. Paiaya knows how to film and cut together these sequences, letting the viewer appreciate Daniels’ talents, which seem undiminished by age, and give hope to all of us who are on the wrong side of… Well, let’s say 25, and leave it at that, shall we? On the other hand, the film has its share of logic issues. At one point near the end, The Executive is pointing a gun at Bradley’s head, who isn’t even looking in his direction – but opts to run off rather than pulling the trigger. What?

Still, this film can certainly be enjoyed – albeit, providing you go in with the right expectations. Which  would be that a) the majority of people present on the sleeve are not going to be in it for long, and b) despite  a suspicious title change in some markets, this is nothing to do with the Dolph Lundgren/Tony Jaa vehicle Skin Trade. Expect anything as consistently glossy as that, and you’ll be disappointed. Expect an adequate time-passer in which Gary Daniels breaks heads, and you’ll be fine.