“Life isn’t some cartoon musical where you sing a little song and all your insipid dreams magically come true. So let it go.”

The above is spat out with passion, relatively early on in Zootopia, aimed both at the heroine and, it appears, equally at another product of the Disney stable, Frozen. It’s probably the best line in the movie, delivered by a cynical buffalo senior police officer, voiced by Elba. The problem is that, having acknowledged the elephant in the animated room – and that’s actually another of the jokes here – the makers then embrace that particular pachyderm, absolutely and with passion. It’s one thing to pretend ignorance of a problem; another to joke about it, then commit exactly the same, tiresome follies as its predecessors – just without even the characters needing to sing about it

Well, unless you count Shakira the gazelle, and that may require some redefinition of “sing”. For she delivers one of the worst pop songs it has been my misfortune to endure, sounding autotuned to oblivion, and with lyrics that appear to consist entirely of Chinese fortune cookies spliced together. I guess the five minutes allocated to composing this musical masterpiece ran out before they could do anything like getting the lyrics to rhyme or scan. I can only presume the writers were given the goal of making I Like To Move It sound like Shakespeare – and if so, they hit that out of the ballpark. To wit:

I keep falling down, I keep on hitting the ground
I always get up now to see what’s next
Birds don’t just fly, they fall down and get up
Nobody learns without getting it wrong
I won’t give up, no I won’t give in
‘Til I reach the end and then I’ll start again
No I won’t leave, I wanna try everything
I wanna try even though I could fail. 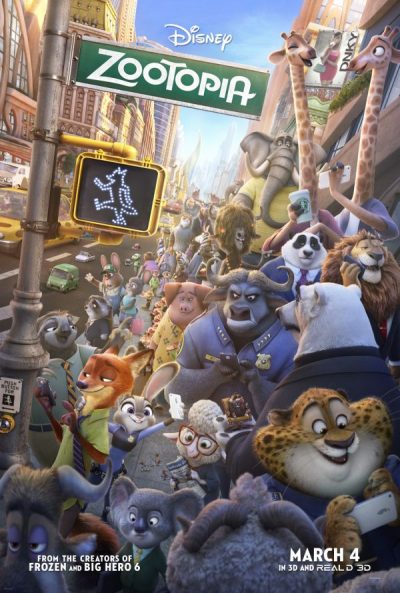 Jesus. The problem is, the lyrics are a fairly accurate representation of the philosophy here, both in tone and depth. “Follow your passion, and everything will work out,” is the space this hits on the Wheel of Morality, and it’s shitty advice. Oh, yeah, there’s a big, lumpy helping of leaden tolerance too. If I may quote: “The more we try to understand one another, the more exceptional each of us will be. But we have to try. So no matter what kind of person you are, I implore you: Try. Try to make the world a better place. Look inside yourself and recognize that change starts with you.” Fuck. That. Or, to be more precise, if you or your offspring have to have basic rules of morality explicitly laid-out in this way, by a cartoon rabbit dressed as a police officer…. Just think of the gene pool and kill yourselves. For even Frozen didn’t need to go as far, in terms of stating its lessons.

Which is a bit of a shame, since there’s a lot of potential in the concept here, and technically, it looks fabulous. The effort that has gone into the production and animation is clear, and when it’s not trying, painfully hard, to be morally elevating, it can be rather funny. Though even there, you’ve quite possibly already seen the best sequence, involving sloths who run the Zootopia DMV, for it was included, more or less complete, as a trailer. It’s a brilliant concept, and the execution is spot-on, taking the joke and stretching it way past the point at which it should stop being funny – which only makes it funnier.

There’s nothing wrong with addressing moral issues in animated films, but this needs to flow naturally from the story: here, it feels an awful lot like Disney came up with the morality first, then tried to construct a story around it. Judy Hopps (Goodwin) has wanted to be a police officer for ever – but there has never been a rabbit cop. Through hard work, she becomes the first, only to discover it’s not all she expected. She gets no respect from her boss (Elba), gets hustled by a fox (Bateman) and eventually receives the most cliched of cop-film cliches: the neophyte is given 48 hours to crack a case, which the rest of the department has made no progress on in two weeks. But there’s no doubt she’ll succeed, simply because Judy is immaculate. Seriously: she doesn’t have a single freakin’ flaw, unless you count her “adorably” naive belief that all her insipid dreams will magically come true. Guess what? They do!

And do not even get me started on the obvious flaw in the scenario here: what the heck do all the predators in the city eat? That’s the true elephant in the room here. Damn, I’d like to see the dark version of Zootopia, which pulls away the curtain from this aspect of the fake utopian society portrayed here, and depicts the factory farms in which one part of society are kept, as nourishment for the others. For, y’see, in reality rabbits are suspicious of foxes for perfectly sound, Darwinian reasons: those that weren’t, became fox food, and didn’t survive long enough to pass this “tolerance” on to their offspring. This whole thing would have made a lot more sense – and I appreciate, sense is a loose construct in Disney cartoons – if it had been, I dunno, different breeds of dogs, rather than the bizarre vegan fantasyland depicted here.

Admittedly, a hard-bitten cynic like me is likely not the target audience, but I can appreciate a well-written screenplay regardless of whether it’s humans or talking animals delivering the lines. This doesn’t even come close. Instead, what you have is a feature-length version of the dumb concepts skewered exquisitely in Finding Nemo, when Bruce and his shark friends organize a support group, devoted to the premise that “Fish are friends, not food.” Needless to say, biology proves to be destiny as far as that’s concerned, and the scene is a good demonstration of why it was impossible for me to take the po-faced moralizing of Zootopia with the seriousness the makers demand.