Coming in on a wave of positive reviews, this low-budget mix of horror and noir is… alright, I suppose. It certainly takes a while to get to the point, to such a degree that, 30 minutes in, Chris turned to me and said “I thought this was supposed to be good?” I couldn’t really argue with her, though it wasn’t long after that things did kick off. Three low-lives are holed up in a remote hunting lodge: meth chemist Milton (Cawthorne) was seduced into teaming up with trailer-park femme fatale Skyler (Tennet), unaware of the psychopathic boyfriend she has in tow, Russell (Boyland). The love-triangle crime gang are soon at each other throats in a welter of violent mistrust – only to find themselves apparently condemned to repeat that fateful day over and over. And with an ever-increasing body count. [This is not much of a spoiler, given the tag-line on the sleeve is “Live the same day. Die another way”] 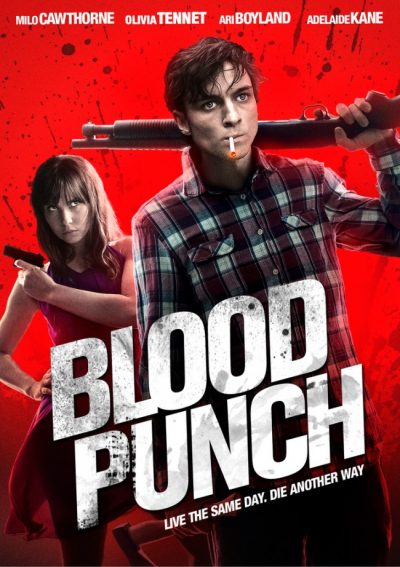 If you’re thinking it sounds like a brutal version of Groundhog Day, you’re about on the money, though to this film’s credit, it does provide a justification for the scenario as it unfolds. This both explains what’s happening and allows the characters to figure out an escape route – though that’s a realization which causes as many problems as it solves. In terms of scripting, it’s nicely done; the issue here are the characters, who are such an unlikeable bunch, you’re left hoping the solution turns out to be a meteor-strike on the lodge, which saves humanity from the entire waste of oxygen which the trio represents. This is the difference between the film and Groundhog Day. Yes, Bill Murray’s Phil was a dick: but he was a funny one, and many of the reasons for his dickishness were understandable. But you could see him change into a decent human being over the course of the film, and you went along on that journey.

Here, not so much. In fact, not at all. Milton starts off in a rehab facility, having been busted running a meth lab out of college. Skyler, similarly, immediately establishes her character as a manipulative bitch. Neither does much to improve themselves in the viewers’ eyes for the rest of the movie. Up until a rather deus ex machina bit of self-sacrifice at the very end, their most redeemable characteristic given by the script is that they aren’t Russell, who is truly repellent. But it’s not very much on which to hang audience empathy, and although possessing a good hook, once it’s established, the movie doesn’t seem to know what to do.

The makers deserve some kudos for going in a fresh direction, certainly, and it’s also a film where the limited resources don’t matter much. However, merely going off the beaten path isn’t necessarily enough to justify a lengthy trip, and more than once, I found myself wondering if this would be better as a crisply-told 20-minute short, rather than a 104-minute feature.