Having seen Callaway’s previous feature, Let’s Not Meet,  and found it wanting, I was in two minds about whether or not to bother with this. The first half, I actually didn’t mind it too much, with some palpable improvements over its ancestor. Unfortunately, it wasn’t able to sustain the progress, with a second half which bordered on the unwatchable. Very much, therefore, a case of two steps forward, two steps back. 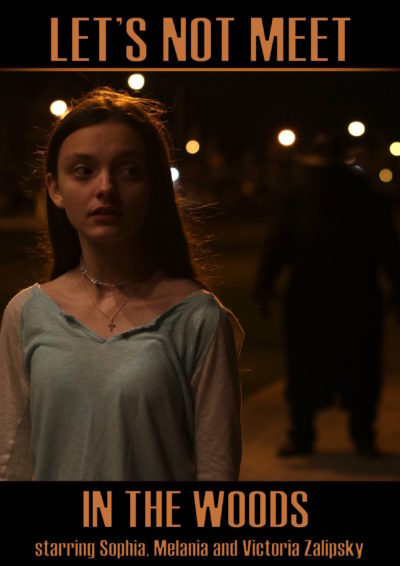 It focuses on a trio of young sisters, who are played in the film by… a trio of young sisters. That’s one of the pluses here, because it gives their interactions and relationship a veracity which is hard for child actors to fake. There’s Mollie (Sophia Zalipsky), Emelie (Melania Zalipsky) and Candice (Viztoria Zalipsky), who are part of a one-parent family, their father being out of the picture for what turns out to be good reason. Their mother is a nurse, and in the COVID world, is hardly present either, largely leaving the siblings to fend for themselves, and document their lives on social media. Seriously, these girls literally have cameras and or cellphones strapped to their foreheads, because the movie needs this, in order to happen. It’s probably not that inaccurate a depiction of contemporary youth though.

The parental disconnect is unfortunate, because Mollie has a weird stalker, who is leaving notes in her locker at school, sending her packages, and generally being creepily inappropriate. It’s never quite clear if they haven’t bothered telling Mom about this, or if she (and the authorities) just blew it off. This section of the film is, as mentioned, not bad. Any dumb decisions can be explained as being due to the protagonists’ age and lack of worldly wisdom, though they seem considerably more savvy than I was at their age, and they come over like real, little people. Then, their mother decides they will be safer being shipped off to a remote rural house belonging to a relative, on the edge of a large tract of forest. Needless to say, cellphone coverage there is spotty i.e. it only works when the plot needs it to.

Sadly, this is more or less where the film falls apart. There’s a cult operating in the area, and it turns out that… Nah, I won’t reveal the ludicrousness of what happens, because it makes no sense based on what had gone before. Suffice to say, the last 40 minutes, you are basically looking at a a near completely dark screen, as Mollie and her sisters run around the forest, in search of each other, and away from cult members. It’s a wretched exercise in no-budget cinema, and utterly destroys the fragile goodwill I was beginning to feel in the first half. Maybe you are intended to figure out what’s going on through listening? If Callaway wants to make a radio play… He should make a fucking radio play. Just let me know in advance, because I have absolutely no interest in watching one.