There have been no shortage of attempts to tell the Frankenstein story in a modern setting. This is another, being described by writer-director Weaver as an “existential slasher”, though I’m still not quite sure what that means. But purely from an entertainment perspective, I’d say the second half of that description, proves considerably more successful than the first in this version.

The central character is Jason Frankenstein (Barnet), whose intended career as a doctor fizzled out in an early mid-life crisis. He’s now a mid-level worker in a hospital, and not exactly happy with his lot, going through a break-up with his overly attached girlfriend (Szabela). But when an unusual patient is brought into the facility, it gives him an opportunity to follow in the footsteps of those family traditions.  In particular, the one about meddling in things with which mankind was not intended to meddle. With the aid of some shady, drug-dealing paramedics, who act as his Burke and Hare, and an equally dubious nurse (Sheridan), Jason assembles the parts necessary for his work. It largely follows the expected pattern thereafter, with the newly-created combination (Wetherbee) escaping, and going on the rampage, his manufacturer in pursuit. 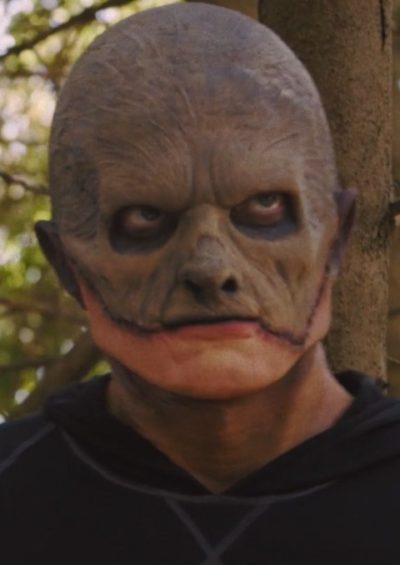 Let’s first talk about what works. I really liked some of the effects, which are practical rather than CGI. The opening has an excellent face-ripping,  which certainly meant the film got our attention, right out of the gate. Some of the surgical stuff is also very well done. However, these moments are not enough to overcome the two major problems: pacing, and an excruciatingly bland lead. The former shows up in a slew of scenes which either go on too long, or serve no purpose at all. Why have one shot of him riding his motorcycle down the road, when you can have four? Or a conversation in a bar about his family history, with a soft-porn actress, who then vanishes from the movie, without even the good grace to get nekkid? He’s called Frankenstein, for heaven’s sake. That’s all the audience needs to know.

Then there’s Barnet’s blandly monotonous performance. I suspect this might partly have been deliberate. He’s ground down by the tedium of his everyday life. But this doesn’t make it any more interesting to watch. I have perhaps been spoiled by my recent viewing of the Hammer Frankensteins, since Peter Cushing basically cannot be improved on. But in a film like this, where there is no real antagonist, you need someone with a commanding presence at its heart. Instead, this feels like Re-Animator, if you took out Jeffrey Combs, David Gale and Barbara Crampton, leaving Bruce Abbott to carry things on his own. The goodwill generated by the spectacular opening, is gradually frittered away, in a procession of uninteresting chit-chat. Maybe that’s what “existential” means? Even the appearance of cult favourite, Robert Dix, in his final movie, is unable to do more than briefly elevate proceedings.