The set-up here could just as easily go into comedic farce as horror. Two couples show up at an Airbnb-type apartment, it having been double-booked. Although it’s too late that night for other arrangements, the place has two bedrooms. So the (rather creepy) letting agent suggests both couples stay there that night, for free, and he’ll figure it out in the morning. Hilarity ensues! Or not. For by the time check-out time arrives the next day, there are more bodies than residents with a pulse. This begins with an escalating series of drink, drugs (both willingly taken and covertly administered) and sex (both consensual and… not so much), followed by recriminations in the morning, eventually turning into violent confrontation. 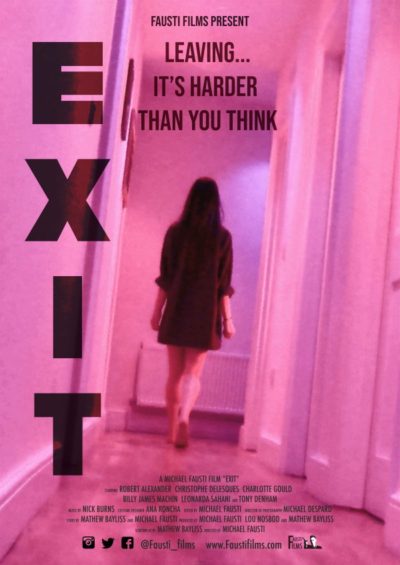 There’s a deliberately off-center vibe, with scenes drenched in Argento-esque filtered colours. It also has a willfully languid pace: despite early flash-forwards of sex and violence, these actual incidents take their time to show up. Instead, there’s a lengthy diversion featuring an interruption by Napoleon. Well, an extended monologue about his cause of death, to be specific. And slo-mo. So. Much. Slo-mo. I think, had the entire film unfolded at normal pace, it feels as if it would have lasted 40 minutes. And been rather better, truth be told. The first half is painfully chatty, with the predatory French couple (Delesques and Gould), slowly circling the more reserved English pair (Sahani and Machin). This is depicted in a way that couldn’t be much more nationally stereotypical if it tried e.g. French-he loves wine; English-he will only drink beer; French-she works in fashion.

The meat of proceedings only arrives on the table the following day, with battle lines drawn along geographical lines – the earlier reference to Napoleon perhaps makes sense in that context. Meanwhile, the agent hovers, unseen in the background, occasionally communicating with his boss (?), a bespectacled Cockney in an office with the Sun’s infamous “GOTCHA” headline on the wall. He doesn’t seem to like foreigners much. While the pace eventually does pick up, best not look for explanations. I could state the four people are trapped in a mid-level of hell, and that’s as good a guess as any. Or maybe it’s a metaphor for Brexit. That’s plausible too.

I don’t mind putting in effort when watching a film. But it has to be a partnership, and here, it feels like the viewer is doing most of the work, with Fausti kicking back, saying “Well, what do you think it all means?” I will say, it did manage to retain my attention – probably more than I expected, given it’s basically a four-hander, set in a single location. Fausti certainly does his best to jazz things up, though the results are a bit uneven. [Really, someone needs to prise his fingers off that slow-motion button] The performances are functional, with Machin probably doing best, perhaps because he seems the only normal person of the four. For someone portrayed as shallow and lacking in appreciation of the finer things in life, he’s surprisingly sympathetic.