Following the death of his mother, the life of Juan (Santorelli) becomes almost entirely empty. He gets up, goes to work and comes home, with very little in the way of human interaction. His health is plagued with issues: his eyesight is failing, he stutters, and when he brushes his teeth, there’s a disturbing red tinge to the resulting wash. Weird events are also beginning to plague him. A mysterious hole appears in the back yard, and he can’t shake the sense that there is someone else in the house. He’s not wrong. For he receives a visit from a masked figure, who offers to cure Juan’s ills, in exchange for little favours: specifically, bringing the intruder victims. 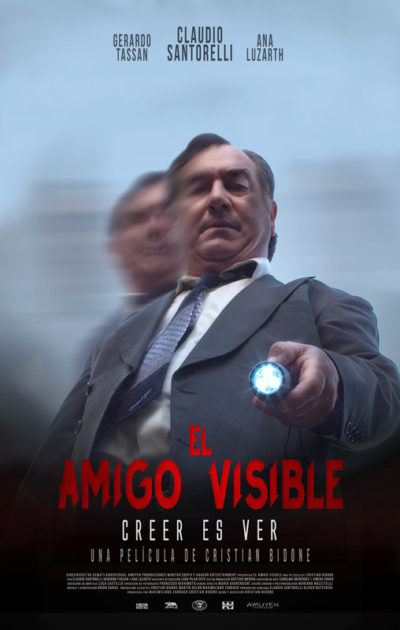 It’s an interesting idea, but the execution is too front loaded to be fully successful. By that, I mean, the everyday tedium of Juan’s life is portrayed beyond the point of diminishing returns. How many scenes of him masturbating in the shower do we really need? I’d argue the answer is “none”: the film begs to differ. Admittedly, there is a brooding sense of unease, as it becomes clear from quite early on that Juan is going to snap at some point. The question then becomes, in what form will that take? I did like the way Bidone portrayed his lead character’s isolation. You never properly “see” anyone else, such as his work colleagues or boss. They’re always on the edge of the frame, out of focus or harshly cropped.

Considering how little happens in the first half, it also needs a strong performance to hold interest. Fortunately, Santorelli is up to the task, otherwise this could have been unwatchable. Conversely, the back end, after the arrival of his “visible friend,” could well have been significantly extended, with Juan proceeding more slowly, but further down the path of darkness, lured by the offers of better health, etc. As is, he goes from zero to murder accomplice with surprising ease, and it reaches the finish surprisingly quickly: 67 minutes in, and the end-credits are rolling. While perhaps an accurate depiction of the likely outcome, I would have been happy to trade some cinematic license for reality in this case.

I must say, initially, we thought it was his wife that had passed away, rather than his mother. For instance, he’s first seen sleeping on one side of an obviously empty bed. Discovering it was not apparently his spouse but his Mum on the other side, made for a rather jarring experience. You’ll understand it raised all manner of questions, not directly connected to the narrative. It’s definitely harder from the audience’s perspective, to be sympathetic to a creepy son than a grieving widow, But you certainly can’t say Bidone took the easy route, so credit for that. You may well figure out where this is going before it gets there, and if so, waiting for the film to catch up is likely to leave you less than satisfied.