Like The Last Frankenstein, this hits the ground running, with an energetic opening sequence that made us sit up and pay attention. In this case, it’s a shoot-out and subsequent chase between two groups of bikers, which features some of the most enthusiastic arterial spray we’ve seen in quite a while. Unfortunately, also like Frankenstein, it’s not able to sustain the opening pace, and ends up getting a bit bogged down in pacing issues.

The basic plot is relatively simple. Alan Koslovsky (Corneau) is affiliated with the Impalers, one of the biker gangs mentioned above, and is in trouble after racking up a large gambling debt to the gang’s leader. To pay it off, he agrees to go on a mission to pick up a suitcase, only for things quickly to spiral out of control. For the Impalers are not the only people with an interest in this particular piece of luggage. Rival gang the Hangovers, and some Russians, under Anton Litso (Packwood), will do anything required to get their hands on it. It doesn’t help that the key which opens the case is now buried deep in the intestinal tract of another character.

When this is in motion, it’s not bad at all. There are some surprising drone shots that look very nice, and for example, the scene where the key is recovered is gleefully messy (if perhaps, medically questionable!). There’s no doubt the aesthetic debutant director Langlois is going for here is pure grindhouse, like that classic of modern Canucksploitation, Hobo With a Shotgun., and on occasion he nails it. It certainly makes for a hell of a trailer, which is half the point of these things. Corneau’s facial hair – think young Lemmy on steroids – may well end up having a lengthy career, all of its own. 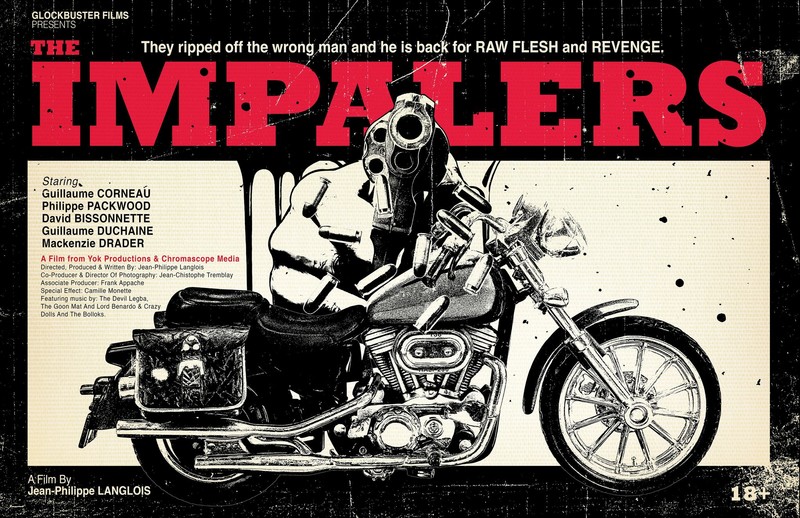 However, the problem is the film’s tendency to come grinding to a halt, with multiple scenes which go on well past the point where they cease to be of interest. We do not need, for example, to see every single detail of Koslovsky losing at poker. Similarly, there’s a burlesque striptease which is flat-out dull. [Pro tip: if you’re going for a grindhouse feel, the actress playing a stripper should definitely not be wearing demure pasties] Or, while the hero does possess a cool car (top), this does not mean we are required to have an extended sequence of him driving it. I mean, isn’t he supposed to be in a biker gang?

These lulls almost completely drain the energy out of the picture, and it has to re-start its engine and try to get back up to speed. This is only intermittently successful, and it ends up sputtering towards the finish line, rather than opening up the throttle and going full tilt. Still, as a first attempt, and considering the limited resources, this is impressive enough to leave me interested in seeing more from Langlois. I just hope he learns the meaning of the term “brief montage” in the meantime.