I sense that Universal will keep making these films as long as people keep watching them, even if the results are not much more than an extinct species being mercilessly flogged for two hours and forty minutes. To some extent, it’s not the franchise’s fault. When the original movie came out – close to thirty years ago – its realistic depiction of dinosaurs was groundbreaking, and could generate a real sense of wonder. Now, the dinomarket is saturated, with any number of lower-budget entities seeking to ride on the Jurassic coattails. Merely existing is no longer sufficient to stand out from the pack. Though that the task is difficult, isn’t much of an excuse for the lack of effort apparently expended here. 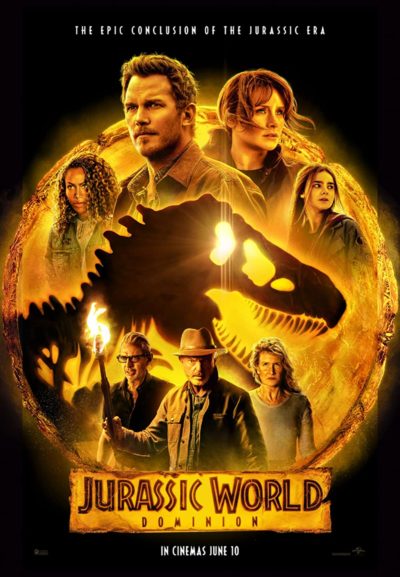 The main plot here doesn’t even involve dinosaurs, though they have now spread around the globe. The focus is more on a clone I’d basically forgotten had existed. Claire (Howard) and Owen (Pratt) have been raising her, until she’s kidnapped by EvilCorp Biosyn, who want her DNA, leading them on a chase around the world (the funding of which is… uncertain). Meanwhile, in a largely disparate other story, we go old school and bring back paleoscientists Ellie Sattler (Dern) and Alan Grant (Neill). They are investigating locusts which only eat non-Biosyn crops. It takes about 90 minutes before these two strands cross paths. Ian Malcolm (Jeff Goldblum) also shows up, and I suspect only legal concerns stopped Universal from digging up the corpse of Sir Richard Attenborough.

The irritating teenage girl feels rather similar to the problem which infected Godzilla: King of the Monsters, with every moment spent on her being time which could have been used for carnage and mayhem. There’s also the usual anti-capitalist, pro-environmental messaging, which is about as subtle as a brick, e.g. Malcolm proclaiming, “In order to instigate revolutionary change, we must transform human consciousness.” Maybe we don’t want revolutionary change, Doctor Smug. Just slip another brontosaur onto the climate change barbecue, and we’ll all relocate to Canada if needed. Then everyone involved borrowed a private jet from Taylor Swift and flew back to Hollywood, having done their part to save the planet.

Snark aside, this likely isn’t as aggressively stupid as its immediate predecessor. When actually showcasing the dinosaurs, rather than clones, locusts or soap-boxes, it proves that throwing ludicrous amounts of money at some things can work. The budget here was $185 million, and I’m here to assure you, the script was not responsible for that. There is a glorious, stupid sequence where the creatures break out of a Maltese black-market dinosaur bazaar, and go full Bourne in the subsequent chase through the streets of Valletta. We’re talking full-on dinoparkour, leaping off roofs and onto balconies in pursuit of Claire and Owen (top). Good lord, it’s awesome. 90% of the rest is equally dumb, just in a less entertaining way. The failure to explore the tension between humans and dinosaurs coexisting is especially disappointing. Oh, well: maybe in the next trilogy.