After the apocalypse, many things will be in short supply. However, hair-care products and musical instruments will not be among them. That’s the lesson learned from this Malaysian action film, which takes place after a bruising global conflict, including weapons conventional, nuclear and chemical, has apparently killed everybody over the age of thirty. I say “apparently”, since the film neglects entirely to mention this – I got it off a semi-coherent review on IMDb. I’m not quite how it works either, considering fifteen years have passed since then, and there still don’t appear to be any adults in the room. Nor does there seem to have been much effort to rebuild civilization, going by the amount of rubble left lying around. 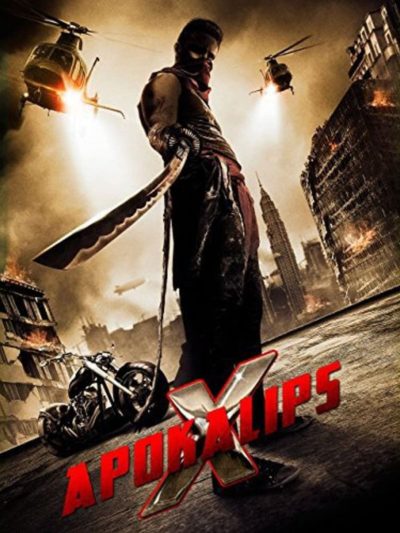 The survivors here have grouped themselves into five gangs, who have achieved an uneasy peace around the ‘Free Zone’, a neutral territory where they come together to settle their disputes and, it seems, have dance battles. Yeah. In several ways, this is perhaps closest to a martial arts version of West Side Story, complete with a “romance across the barricades” plot, which triggers conflict between the groups after one of the lovers is stabbed in a brawl. From here on, the fragile cease-fire collapses, and it’s more or less an intermittent series of battles, in particular as Kala (Miskin) seeks to assert dominance over the other gangs, and take over from the current top dog, who goes by the name of X (Kamil).

To start with the good stuff, I did like the look of the film, which has a cool, pastel tone almost bordering on monochrome. And even if the reason for it is questionable, given the time passed since Armageddon, there’s a good deal of effort put into the set dressing. There’s no denying that an apocalypse took place, though given the amount of graffiti present, add aerosol paint cans to the list of things that remain plentiful. However, outside of these technical elements, it’s not very interesting. It’s as exciting a society as you’d expect, if World War III wiped out everyone except for the Emo kids. It feels like just about everyone here probably spends their time writing bad poetry in their rooms, when not bickering with each other.

I’d have been okay with this, if the action was up to much. However, the insanity which is Indonesian martial arts films, does not yet seem to have percolated over to its South-East Asian neighbours. The fights here are very much second tier stuff, and hardly any stick in the mind. The best is probably towards the end, when Kala takes on Kulat (Tam), the leader of the women’s gang, though it’s still nothing exceptional. There is a nice moment at the very end, when the people who have been killed, transform into angels and ascend to heaven. That’s kinda nice, yet falls far short of redeeming the underwhelming qualities of what had gone before.