I has a confuse. This, it turns out, is an adaptation/spin-off from a 2011 anime series, Blood-C. That, in turn, was a spin-off from the Blood franchise, which gave us Blood: The Last Vampire, taking both live-action and animated forms, in which hunter Saya Kisaragi sliced and diced her way through bloodsuckers, like a sailor-suit clad Van Helsing. She does appear in this, though I didn’t make the connection until after the final credits had rolled. This is likely a result of a screenplay which presumes a prior familiarity in viewers with the universe in which it operates. In other words, do not expect anything to be explained. I’ll be charitable and assume it makes more sense to people who know Blood-C. Me, though? No clue. 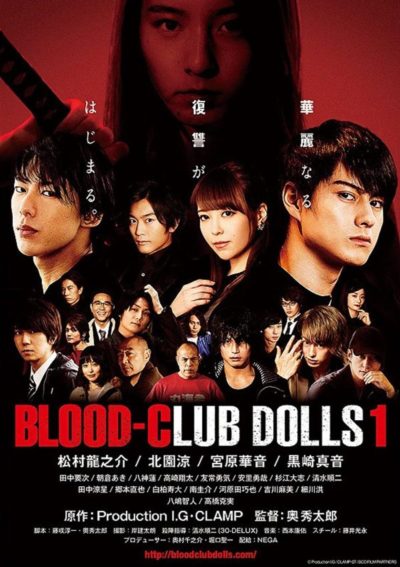 As best as I can figure out, it’s about a fight club which takes place in a night-club, using prisoners as the more or less willing participants. One of them is Aiba (Kitazono), who had been sentenced to death for killing all 32 members of his class with a sword – a feat which surely merits a “Well done!” His sister, Mana (Asakura) refused to believe Aiba could have committed such a heinous crime, and now is on the hunt for her brother, given his absence from death row. She gets some help from an eccentric police detective (Yashima), who has to deal with political interference in his investigation, since the Prime Minister’s son is deeply involved in the Blood-Club.

However, as someone who has not seen a single episode of Blood-C, very little of this made any impression on me at all. The anime origins did make sense as to why everyone taking part in the fighting looked like they had come straight from a K-Pop audition. Apparently, the first rule of Blood-Club is, you need to have really good hair. Beyond that, I’m hard pushed to say much about any of the characters. Except, perhaps for the rogue teacher who roamed the streets providing education to disadvantaged kids, when not engaging in bare-knuckle brawls. Perhaps if I was familiar with the 12-part series, two manga, novelization or, I kid you not, a 2015 stage play which all preceded this, maybe I could have given a damn.

The action isn’t bad, with a no-nonsense approach which suggests the participants want to terminate their opponents quickly, rather than in the most showy manner possible. There isn’t enough of it though, at least in comparison to my expectations based on the movie’s title. As that suggests, there is apparently a Blood-Club Dolls 2, which perhaps explains why this doesn’t bother tying up almost any of its plot threads e.g. we never get a full explanation of quite how Aiba got convicted on 32 counts of murder he didn’t commit. However, there’s not enough here to make me want to bother. Though I may take a stab at Asura Girl, a prequel spin-off set before World War II, for GirlsWithGuns.org.