And relax.  You can breathe easy.  It’s neither a Netflix nor Chris Hemsworth produced film.

So, let’s start with a confession – I was always going to give this a AA++ rating as it has the wonderful Salma Hayek in it’s cast, who is justifiably known for her two major acting assets – effortless talent and graceful on-screen presence… …since you asked.  Don’t pull that face? What did you think I meant!?  (You smutty puppy!)  Anyway, it’s also got some bloke called Dafoe in it.  Whoever he is.  Albeit both play tertiary characters (alarmingly well).

Whereas sadly the jury is out on our main protagonist (Massoglia) who seems for most of the film to be ‘somewhat’ out of his depth.  But then again, that’s maybe what he was going for, so just ignore me and jog along to one of Jim’s reviews.  If I’m honest, I think he does a much better job of actually reviewing a film, whereas I tend to just ramble on about all sorts of tangential… <snip>

It’s a coming of age vampire film with a helpfully concise set-up, in a world with an uneasy truce between ‘Vampires’ and ‘Vampanese’*, wherein we find a charming chap called Mr Tiny (Cerveris) who is trying to provoke a full-blown war for him to enjoy as a spectator sport. 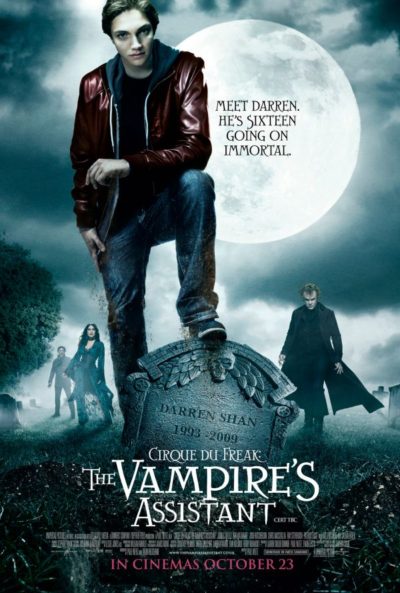 It is also quite derivative on lots of levels, including style and feel.  Think of blending a ‘Vamp’, ‘Lost Boys’ and ‘Miss Peregrine’s Home for Peculiar Children’ smoothy and you’ll get the tone.   None of which is bad, far from it, it’s just that your spidey-sense will be working overtime, all the time.

So, it is by visiting a… uhmmm… visiting Freak Show, ‘one night only’, that into this underworld Steve (Hutcherson) and Darren (Massoglia) are pulled.  Plunged slap-bang, right into the middle of an infernal mess with each side in the uneasy truce eager to claim (at least) one apiece.  Darren sides with the Vampires (hurrah!!) whereas bad-blood-Steve chooses the Vampanese (boo!!).

Helping our semi-reluctant hero is Larten Crepsley, played by the excellent John C. Reilly, without whose presence the film would have been utterly dire and his performance is utterly key in holding the film together, and I breathed a large sigh of relief every time he arrived on screen.  No really.

Overall there are some so-so to halfway decent performances, snappy dialogue, strong stylised visuals, a horrible uneven unevenness to the story and a slightly slow pacing.  And with 49 minutes left we all know almost exactly what’s going to happen next (and it does).  So I switched it off and had a beer instead.  [Jim – finish the damn film or you’re fired. Again!]

Erm, where was I, oh, yeah so it’s the apocalypse and ruling the world that’s at stake.  It is written, a predestined destiny don’t you know!?  (Sorry about the tautology)  And as for those flipping hippies populating the freak-show where Crepsley and Darren find abode… pah… a pox on them!  Oh and did I mention Salma Hayek?  Phwoar!!!

So, to tidy up.  The story is uneven, trite and pretty rubbish.  Some of the performances are really very good and sadly, set against Reilly, Cerveris and Hutcherson, Massoglia’s performance is (imho) woefully lacklustre.  Still, it’s got Salma Hayek in it.  It’s very well shot, stylised and pretty, and the final 49 minutes/denouement are/is shite and entirely predictable, but at least it’s got Salma Hayek in it.  Both of them.