I guess I saw It – even doing so at the cinema – but it doesn’t appear I ever reviewed it. Er, if you see what I mean. As I recall, I was entertained, but didn’t quite get why it became the second-highest-grossing “R”-rated film of all-time at that point. The second is more or less a reprise, only with adults facing off against the entity, rather than children. As such, there’s a real sense of deja vu, even if the casting is spot on: it’s very easy to see these actors as the grown-up versions of their younger selves, both physically and in mannerisms. 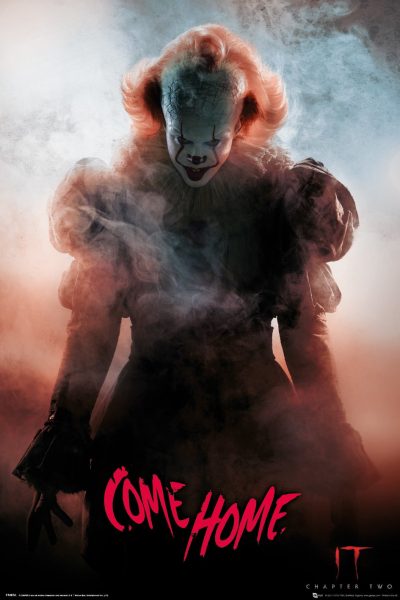 You probably don’t have to have seen the first part to understand this, though I imagine almost every viewer will have. Every 27 years, the small New England town of Derry is terrorized by something. It most often takes the form of scary clown Pennywise, abducting and eating residents, with a particular fondness for kids. Last time it appeared was the late eighties, which a gang of kids, calling themselves “The Losers’ Club”, were able to end its reign of fear. Now, they’re all adults, spread across the country, when they get a call from Mike Hanlon (Mustafa). He tells them Pennywise is back, and they need to fulfill a promise made by their young selves, that if it returned, they’d come back and fight it once more.

The film doesn’t feel like it needs to be 34 minutes longer than its predecessor, which was already sporting a meaty 135-minute running time. This follows the same template. The characters have to face and overcome their various fears, as personified by Pennywise, before banding together and venturing into the world beneath Derry for a decisive confrontation with it. The main difference, I guess, is that these are now “big-boy” fears rather than the concerns of childhood. There are some interesting ideas here, like the historical side, with its presence in native American folklore – though their story of witnessing its arrival from the stars doesn’t quite jibe with a later comment that it has been in Derry for “millions of years.” [There’s a nice nod at one point, which suggests it might be a relative to The Thing]

Muschietti delivers some creepy imagery, but I have to wonder why the characters never appear to learn it’s all just in their heads. I’m not sure there’s much here to justify the R-rating, beside a bit of swearing, while some of the effects are less than stellar, especially considering the budget.  And the climax is pants, with The Losers’ Gang basically bullying their nemesis out of existence by yelling insults at it. Really? Ironically, one of them, Bill Denbrough (McAvoy) is now a writer, who is forever being criticized for the endings of his works. They probably weren’t any worse than this. Many of the performances are decent, but in a quest to give all the characters space to develop, even at almost three hours long, the movie ends up failing to do justice to most of them.