I have a pretty low tolerance for “found footage” films. This pre-dates even the oft-imitated Blair Witch, a masterpiece of hype over substance which was to the genre, what Night of the Living Dead was to the zombie flick. I think my earliest encounter with it was probably Cannibal Holocaust, the first “video nasty” I ever saw, and which left me largely unimpressed. Since then, most entries have left me equally chilly: it’s too often used by low-budget film-makers as a lazy crutch, to excuse their shitty audio and camerawork. To this film’s credit, that doesn’t appear to be the case. Though it’s still a contrived concept, requiring significant suspension of disbelief and some squinting before it will make “sense”, there does appear to have been thought put in. Which immediately elevates it to the upper-tier of found footage movies. 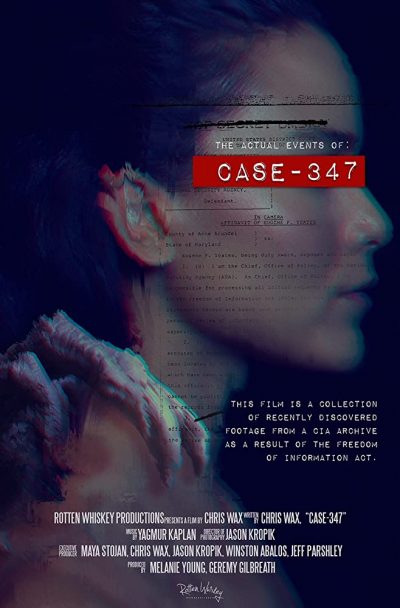 It begins with a hypnotic regression session on Mia Jensen (Stojan) which quickly uncovers something troubling. We then go back to see how we reached that point, and learn she was making a documentary about alien abductions, originally from a sceptical point of view. This structure feels like a bit of a misstep, since we know where it will end; it takes very little effort to figure out how the film is going to get from A to B [and spoiler: your guess will largely be accurate]. This doesn’t make the journey worthless, with some interesting detours on the way to a destination, visible from some way off. Turns out Mia’s Dad had previously done research, his belief in the abduction phenomena feeding into their estrangement. His house, where Mia hasn’t been for years, is full of data and contacts which she hopes to use to find a common cause for what she believes to be symptoms of a psychosis. However, the deeper she goes down the rabbit hole, the less viable her scepticism becomes. That’s especially so, after a former research colleague of her father (Gilliland) shows up, and things start to happen which could be the precursor to Mia and her team’s very own abduction experience.

The makers appear to have done their research on the topic of UFOs, name-checking the likes of Roswell and White Sands, as well as credibly discussing the topic of alien implants. However, it is – perhaps inevitably – a bit talky, too often failing to abide by the “show, don’t tell” mantra. It has one particularly effective sequence, beginning when someone is asleep, yet a creepy voice can be heard in the room. And it does work at least acceptably when explaining the cameras, Dad’s house being equipped with a surveillance system for reasons that do hold water. So, fortunately, we’re not stuck in the motion sickness-inducing hell which is pure hand-held. I’m thankful for this. Of course, when the final, expected encounter takes place, those fixed cameras are either forgotten about or conveniently unable to capture the action. It’s funny how that works…