Having seen and greatly enjoyed the fictional follow-up to this, Grand View Blvd., I decided I needed to go back and see McCall’s documentary set in the same universe, containing the Jejune Institute and its weirdly charismatic leader, Octavio Coleman Esq (Bender). I finally got round to it on Monday, which turned out to be particularly fortuitous timing. I discovered while writing this review, that the series inspired by the doc, Dispatches from Elsewhere  – in which Richard E. Grant takes over the role of Coleman – started screening on AMC the previous day. That’s the kind of cosmic coincidence of which a guru like Coleman would surely approve. 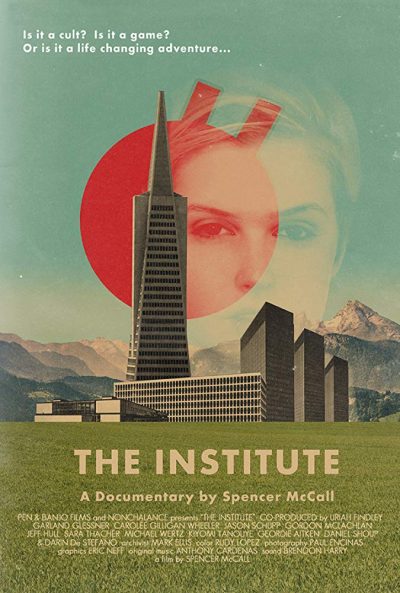 Though I’m not sure documentary is quite the right term, since the Institute was entirely fabricated, being an aspect in an “alternate reality” game staged  in San Francisco by Hull. Beginning with bizarre flyers posted around the city, whoever responded to the number on them was drawn into another world of battling cult groups, pirate radio stations and weird technology, pursuing a state of mind called “Nonchalance” (not unlike the concept of ‘Slack’ promoted by the Church of the SubGenius), and a missing young girl called Eva. This was no small-scale endeavour either: it ran for three years and had players numbers in the many thousands.

This film tells the story of the game, from both sides of the curtain, and manages to be both fascinating and frustrating. The sequences depicting events as they unfold are thoroughly intriguing, pulling the viewer into this surreal other world, in much the same way as the game did its participants. If Dispatches takes the same approach, I’m definitely curious to see it. In the humdrum universe of everyday life, it’s easy to see the appeal of the adventure which this offered. But the unfolding of these bizarre events are persistently interrupted by talking-head interviews, which interrupt the narrative flow, and don’t offer any insight into either side of the exercise. For instance, why did Hull start the game is barely scratched. And who funded the undeniably significant costs involved in this lengthy fantasy? My bet: the CIA, as an experiment in mind-control and manipulating a population. Go on. Prove me wrong…

The participants interviewed are an unedifying lot, as if someone had put out a casting call for San Francisco stereotypes. It may sound harsh, but I can understand why they’d need some external excitement injected into their lives. They largely look like the kind of people incapable of taking charge, and making things happen for themselves. In other words, wannabe cult followers, and I felt my interest relentlessly ebb away as they babbled on about the impact it had on their lives. To Hull’s credit, he did at least provide closure to those who stuck with the game, bringing them to an event where the warring cults came together with a message of unity. But it seems to have been not what some of the participants wanted. I feel kinda the same way about this film, which seems to show that McCall’s strengths lie more in the narrative field.