It turns out, this is something of a spin-off from The Institute. This was a documentary by McCall recounting the sage of an alternate reality game which ran for three years in San Francisco, with over ten thousand participants, based around the Jejune Institute and its founder and leader, Octavio Coleman. Fortunately, you don’t need to have seen that to enjoy this surreal mind-fuck. Indeed, ignorance may well enhance the mind-bending feeling here, with the less you knowing about the “man behind the curtain”, the better. Though discovering after the fact, that this was more or less three separate entities, edited together into a single project, certainly enhanced my appreciation of the work involved. 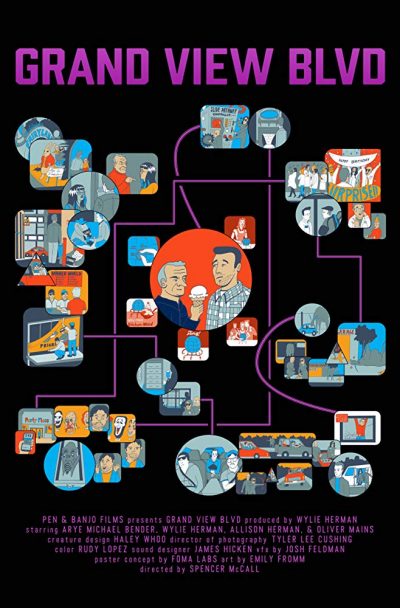 It’s undeniably meta, with Herman playing film-maker Wylie Herman, whose bread and butter is making crap corporate training videos, about sexual harassment or whatever. His efforts in more dramatic lines are desperately (if amusingly) unsuccessful, and he’s barely making a living, to the exasperation of his wife (played by Herman’s real wife). But then he gets a well-paid yet undeniably strange commission, to interview and record Coleman (Bender), leader of a cult-like group which hovers somewhere between New Age and brainwashing. Wylie is unnerved, but hey – the money is good, so what’s the possible harm? However, as he goes further down the rabbit hole, the weirdness gradually intensifies. Why is there a white van constantly parked outside his house? And what is Coleman’s real reason for selecting Wylie?

While I’m a big fan of paranoid cinema like this, I’ve found the sizzle often ends up being more satisfying than the steak. Setting things up is easy; delivering an adequate punch-line considerably harder. But it’s the latter area where this probably excels, with a thoroughly satisfying ending I can only describe as a cross between Star Wars and Rocky Horror. Yet this makes sense, in terms of the universe which it has strategically assembled over the preceding ninety minutes. McCall even then adds a delightful coda – perhaps revealing who is the true “man behind the curtain” – providing a tremendous cherry on top of the whole, delicious sundae. It certainly helps that the two central (really, only) performances both deliver. Herman is a sympathetic character, for whom it’s easy to root, and makes it easy for the audience to follow him into the woods.

It’s Bender, however, who makes the film particularly watchable, combining elements of L. Ron Hubbard and Jim Jones, while looking disturbingly like “Bo”, the guy who ran Heaven’s Gate. Having grown up close to the Findhorn new age community in Scotland, it’s a scarily accurate portrayal of a “guru”, and almost hypnotic to watch. It is somewhat annoying to be in the frequent presence of a character who clearly knows a lot more about what’s going on than we do, and just won’t tell the damn audience. The urge to reach into the screen, grab him by the throat and yell “Stop being so damn obtuse!” is almost overwhelming. Yet I suspect this is both deliberate, and part of the fun. I’m definitely going to have to track down The Institute.

This film was screened at the 2019 Apocalypse Later International Film Festival.