You’d think those in charge of robots would have learned by now. Repurposing military hardware to civilian purposes is never a good idea. Inevitably, your super-intelligent toaster or whatever, will revert to type and go on a murderous rampage. This has been so, at least since Hardware in 1990; it’s kinda comforting to realize it’s still the case, almost thirty years later. Here, it’s Auto (physically played by Knight, with a voice by Jim Tasker), a prototype installed as a test at Alert Insulation. Its success leads to a plan to replace 90% of the staff… but also to replace Auto himself with a newer, better model. Needless to say, neither the humans nor the robot are impressed when they discover this. Only one starts squishing heads, however. 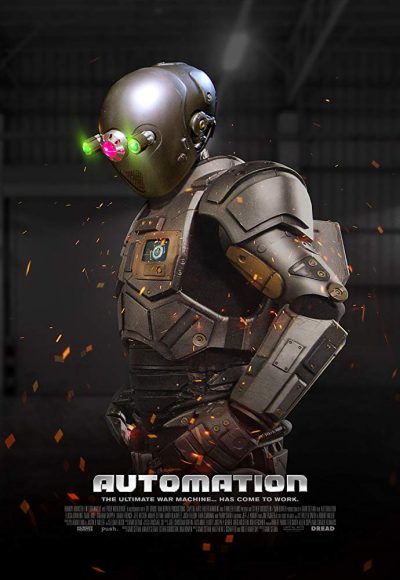 I guess what separates this from most “robot on the rampage” flicks, is the significant effort put into establishing Auto as a character. This is most apparent in his relationship with freelance contractor and wannabe singer Jenny (Dowling, for some reason giving off a Cindi Lauper vibe?), and there is a bit of a character arc for Auto, due to its learning capabilities. However, given this “humanity” it also comes off as rather selfish, Auto apparently concerned only when its own employment is threatened. It might have been a more interesting direction, had the robot “gone postal” in a misguided attempt to protect its flesh-based friends, after perceiving their unhappiness.

Less successful, generally, are the attempts at depicting workplace life, slipping too easily into simple tropes like the office asshole, or the slut (Katz), which are just not very interesting. These elements feel like the movie is going for an Office Space-vibe, yet are so obvious as to be more grating than amusing. And I’m not sure if this is deliberate, but the amount of actual work done by anyone employed at Alert Insulation appears close to zero. They could probably be replaced by a crate of Fitbits, without company productivity suffering significantly. That said, it still seems rather insensitive for the boss to announce mass layoffs on the day of the company Xmas party.

One impressive thing about Auto’s design, is the way it manages to be both friendly and creepy, as appropriate. Initially, it looks like Big Hero 6; when matters eventually escalate (as you always knew they would, and would be disappointed if it were otherwise), Auto “feels” more malevolent – as when it misunderstands the term “to have a crush on someone.” The biggest threat comes in the shape of its creator, Alan (Shen), who is armed with a dildo-like termination device that will perform a factory reset on the robot brain. But nobody, not even his pal Jenny, is immune to the danger when Auto’s andro-PTSD kicks in. All told, Auto is a slight piece of entertainment – yet entertaining enough it remains, and may leave you glancing nervously over at your Alexa.

This film was screened at the 2019 Apocalypse Later International Film Festival.