An excerpt from the shooting script of In the Tall Grass: 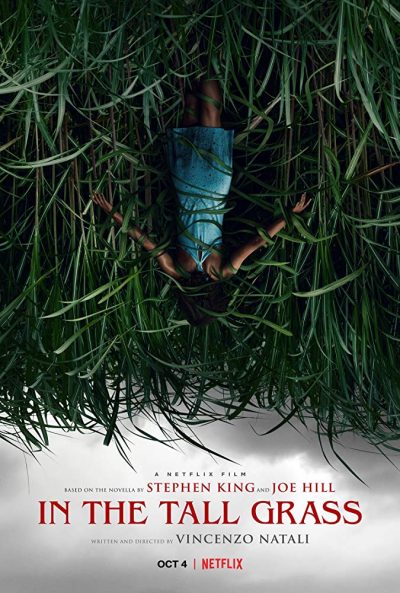 Brother and pregnant sister Cal (Whitted) and Becky (De Oliveira) are driving to San Diego to give up her baby for adoption, father Travis (Gilbertson) wanting nothing to do with it. While pulled over by the side of the road, they hear a child calling for help from inside a field of tall grass. Going to investigate, they find themselves unable to leave, along with the child, Tobin, and his family. Shortly afterward, Travis shows up, having located their car. But he tells the siblings they have been missing for two months. Something in the field is clearly warping space and time, with multiple versions of the characters, alive and dead, roaming the pasture.

It’s all not unlike Natali’s well-regarded Cube, which spawned an entire franchise. Both films find strangers thrown together in a mind-bending puzzle, through which they must fight to survive. But this feels considerably less rigorous, to the point of being sloppy. It’s never quite made apparent, what the rules are by which the field operates. There is a megalith in the middle which seems to be in charge of the whole thing, triggering time loops on apparent whim. Beyond that? A lot of stuff happens, but even by the loose standard of horror movies, I’m not sure much it makes what anyone would call “sense.” The script lacks the internal logic necessary, to avoid feeling like it’s being made up as they go along.

For instance, Tobin notes “The field doesn’t move dead things around.” You feel this might end up being significant – yet instead the route out involves climbing through what can only be called a literal plot-hole.  I will say, Natali delivers no shortage of creepy ambience here, based mostly on the location. If you don’t think twice in future, about wandering away from your car, you’re clearly not paying enough attention to this. And at least they didn’t go for the obvious choice of crop, though I guess King already went there more than forty years ago, with Children of the Corn. On that basis, I guess in 2059 or so, Joe Hill will come up with a story set in a pumpkin patch or something. Probably doubt I’ll be adding that one to my HoloNetflix queue.