SF and fantasy have always been fertile ground for social allegory, especially when it comes to pessimistic depictions: utopias are far less frequently seen, probably due to the lower potential for dramatic conflict. But I always find that commentary only works when the morality flows out of the story, and operates in its service, not the other way around. There’s seems to have been a lot of the latter happening, most obviously in Hulu’s The Handmaid’s Tale adaptation, each episode of which is pretty much the televisual equivalent for male viewers of being slapped across the head with a newspaper by Elizabeth Warren for an hour, as if they were a bad puppy. This is a little more subtle: just not all that much. 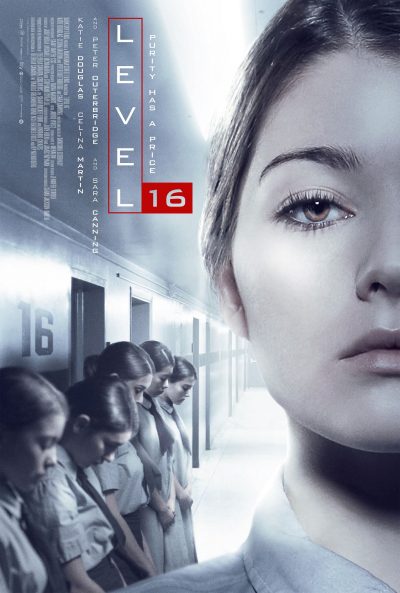 It takes place almost exclusively in the corridors and rooms of the Vestalis Academy, a facility which keeps its young, female and indoctrinated occupants permanently locked inside, until their “adoption”, on completion of the titular course. [Though what is actually so wrong with cleanliness, patience and humility, among the traits Vestalis seeks to imbue in its residents?] This is supposedly for their own safety, because the air outside is poisonous. Though this is such a transparently false pretext, mentioning it shouldn’t be considered a spoiler, any more than the “vitamins” they are required to take on a daily basis are really vitamins.

Vivien (Douglas) has just reached #16, and is re-united with Sophia (Martin), a friend from a previous level. Sophia has secretly gone off her meds, acquiring a new clarity as a result, and convinces Vivien to do the same. Yet can they do so, without attracting the attention of peroxide blonde headmistress Brixil (Canning) or creepy physician Dr. Miro (Outerbridge), who seems particularly interested in their skin-care regime.

It’s the kind of story which could make a good short film, because at 15 minutes long, there’d be a far greater chance of it being able to deliver its plot points before the audience has figured them out. Oh, you may not be sure of the specifics here. But everything is just so blatantly and creepily ominous, there’s no sense of shock at any subsequent revelations. These nefarious schemes might come as a surprise if the Vestalis Institute didn’t subscribe to a concentration-camp chic aesthetic. Or even if they splashed out on their fricking electricity bill, the place being entirely lit by 10-watt nightlights.

Little wonder that both Douglas and Martin portray their characters with permanently concerned expressions. I’m surprised they haven’t furrowed their brows into an early grave. They’re just too earnest to come over as human beings. Compare, say, Christian Bale, Emily Watson and Sean Bean in Equilibrium. For all its silliness, that worked because it had a heart which this is lacking. On the other hand, it is the kind of film which make me wish Trump loses the next election. That’s simply so we don’t get so many of these repetitive films, all set in different wings of the same boring dystopia.