Waiting more than forty years after the original came out before making a sequel is kinda impressive, especially in such a quick-buck genre as horror. [In case you’re wondering, the record holder appears to be Bambi, with Disney taking 63 years before coming out with Bambi II: Deja Venison] Since then, there has not only been a remake, but the remake got two sequels – one of which is actually not bad. This apparently spurred original director Zarchi into getting the band back together, re-uniting with original star Keaton for a long-delayed follow-up.

At 148 minutes, this is pretty much the Gone With The Wind of rape-revenge films. Unfortunately, in this case, that meant me turning to Chris midway through, and telling her, “Frankly, m’dear – I don’t give a damn.” Cut an hour out of this and you’d certainly have something…. well, “good” is perhaps a stretch. Certainly, better – because there’s just far too much slack, with scenes which are either too long or entirely superfluous. But, hey, considering Zarchi (who makes a cameo as a priest) has not directed a film in thirty-four years, we should probably be grateful, merely for this being in colour and with sound. 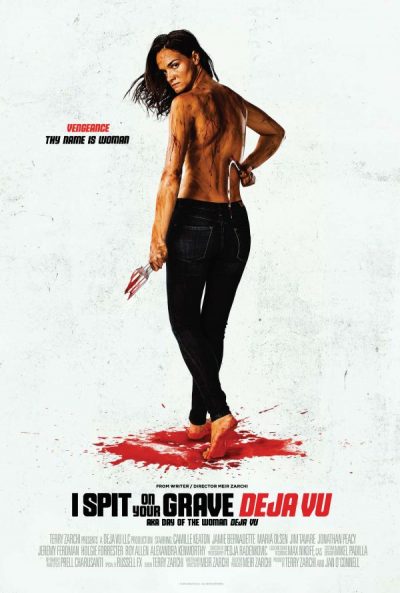 Keaton reprises her role as author Jennifer Hills, now riding the talk-show circuit on the success of a book about her ordeal, after having been cleared by a jury. [Somewhat questionable from a legal perspective, I’d say, though the poster for the original was quite emphatic on this point…] After a light lunch with her daughter, Christy (Peters), now a supermodel, they are bundled into a white van and driven off to the town where the incidents of the previous film took place. Turns out, they have been abducted by the pissed-off relatives of the men Jennifer killed, led by Becky (Olsen), who was the wife of Johnny, the rapist castrated in the bathtub.

Which might not have been so bad: while clearly different from the original, the idea of pitting family vs. family might have worked, not least since Keaton moves well enough for someone in her late sixties when this was shot (back in 2015; it took almost three and a half years to be released). But it’s not long before she and Christy are split up, and the movie loses its way badly thereafter. The main problem is that the country folk are drooling, lurid caricatures, located somewhere between Deliverance and Larry the Cable Guy: they make the residents in 2000 Maniacs seem like genteel and intellectual aristocrats. As a result, the whole thing collapses into sub-SNL parody.

By the time things get a bit rapey (as they inevitably do) and Christy gets a bit revengey (ditto), you’re more or less exhausted by the shrieking unhilarity of it all. Bernadette deserves a great deal of credit for putting it all out there, both literally and figuratively. Just a shame her performance wasn’t in the services of a considerably better film.