Never under-estimate the value of marketing. Nobody paid any real attention to this film, when it first came out in late 1978, under the blandly inoffensive title, Day of the Woman. Zarchi self-distributed it, to little success and even less attention, but was able to sell it a couple of years later to the Jerry Gross Organization, a company much more well-versed in the art of salesmanship [See their work on the I Drink Your Blood/I Eat Your Flesh double-bill, which we’ve discussed previously]. They changed the title to the far better-known one, and attached the equally famous tag-line: “This woman has just chopped, crippled and mutilated four men beyond recognition… but no jury in America would ever convict her!” 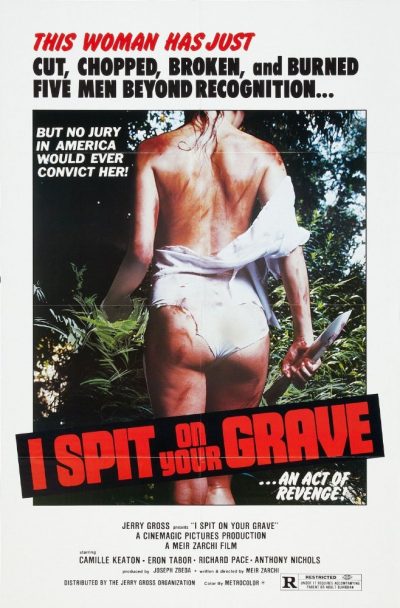 It was given a surprisingly wide release in major cities, and its place in cinematic infamy was likely secured with Roger Ebert’s review. He called it “A movie so sick, reprehensible and contemptible that I can hardly believe it’s playing in respectable theaters… Attending it was one of the most depressing experiences of my life.” Ebert went on to say, “This is a film without a shred of artistic distinction. It lacks even simple craftsmanship. There is no possible motive for exhibiting it, other than the totally cynical hope that it might make money.” Almost forty years later, it still sharply divides audiences. Is it a crass, cynical piece of exploitation? Or a bold, feminist statement about reclaiming power?

I venture to suggest it could actually be both: the two are not mutually exclusive. It certainly makes for uncomfortable viewing by the male audience – likely the bulk of the viewership, be it in drive-ins or the lower end of the “four-walled” theatrical market. It lures us in with an attractive heroine, Jennifer Hill (Keaton), who is displayed for our ocular pleasure in a variety of skimpy costumes, or even less. [You might be forgiven if you mistake Keaton’s nudity for Cannibal Holocaust. Because it’s a lush jungle down there… Hey, it was the seventies]

Just when you are settled, she is systematically and brutally assaulted, for what seems like forever. And, in film terms, it is, beginning at about the 22-minute mark, and not ending until twenty-five minutes later. As a yardstick, the rape scene in Irreversible is nine minutes long, so basically triple that. One of the things which makes it worse, is it stops – then, just when you’re exhaling, the attackers circle round for another go. Then it stops again, and she escapes back to her house. Where they’re waiting for her once more. According to Wikipedia, “The rule of three is a writing principle that suggests that events or characters introduced in threes are more humorous, satisfying, or effective in execution of the story and engaging the reader.” It clearly can be applied to “rapes” and “horrific” as well.

This was Zarchi’s debut as a director. To date, he has only taken the helm one other time, for 1985’s Don’t Mess With My Sister!, which is not as lurid as it sounds. Yet the lack of experience might work to the film’s advantage, since its very under-direction adds to the discomfort factor. For example, the triple-bill of attacks play out with an almost eerie lack of background music, or anything except the ambient sounds. Which are mostly Jennifer’s screams and ignored pleas for mercy. There is little or nothing to sustain this as cinematic illusion. You’re right there, and can’t escape it, any more than the heroine.

To me, that’s something for which the movie should be lauded, rather than criticized. Rape is utterly horrific, and if it’s shown in any other way, then you’re doing it wrong. A sanitized depiction is far worse, and if you can’t do the crime justice, in all its rank, abject awfulness, you shouldn’t bother. To me, Spit or Irreversible are far more honest than glossy Hollywood takes on the topic, like The Accused. No matter how Oscar-worthy the latter may be, it has polished and packaged rape into palatable, mainstream entertainment. This seems rather more fucked-up than Spit. Maybe it’s just me. 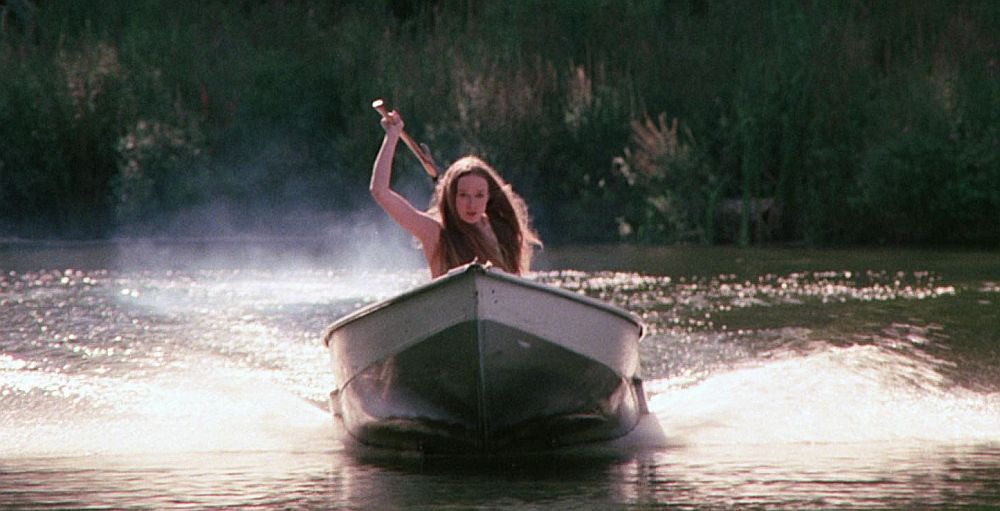 The film is a great deal less effective when it moves from the rape onto the second half of its grind-house equation: the revenge. Unlike the far superior Ms. 45, drifting from justified to somewhat justified to “Who’s the actual psycho here?”, this has no such ambiguity or subtlety. Everyone here deserves what they get, which is kinda dull. There are also a number of moments which take me entirely out of the film, even once we get past the fact Jennifer’s “writing” consists of a banal half-paragraph. Her ability to dangle a fully-grown man from a tree, unaided. The alacrity with which a man leaps into a bath, opposite the woman he raped and believes to be dead. And the oddity, necessary to the plot, that bathroom doors in New England cabins apparently have their locks on the outside. Best ignore those aspects, all painfully weak sauce compared to what has gone before.

The victim of an entirely unnecessary remake in 2010, this is the kind of film it’s almost impossible to like, and if it’s another 20 years before I see it again, it won’t be missed. Yet I can’t deny it packs a visceral punch, in a way few films of the seventies are still capable of delivering. Many other genre films from the decade no longer seem threatening or disturbing: what was extreme in movie content then, has now become commonplace. That isn’t the case here.  If anything, the western world is now more sensitive to sexual violence than at the time; it’s hard to imagine a film like this getting a nationwide release these days.

Finally, this may be a crazy stretch, but perhaps we can speculate on how this film could be read as a Sanders-esque allegory for the American political landscape in 2016. In one corner, a group of “Grab them by the pussy” rural men: crude, arrogant and intolerant. In the other, an intellectual woman from the big city, who believes herself so innately superior, her actions have no consequences, who treats others as “deplorables”. Seen in that light, it’s hard to empathize much with either side, representing as they do the worst America currently has to offer, and tearing each others’ throats out, regardless of consequences.