Abby (Page), her son Sam (Nichols) and best friend Jen (Ochse) go on a camping trip. But it’s not any ordinary trip: their mission is to spread the ashes of Abby’s recently deceased husband, who loved the outdoors and, in particular, the area to which they’re going. Maybe it will also bring Abby and Sam some closure, too, and heal their somewhat fractured relationship. However, not long after they get the ashes scattered, family drama slides down the agenda, replaced by the increasingly ominous figure of a man in sunglasses and a hooded jacket, watching them from the trees. Things only go downhill from there. Both for them and us… 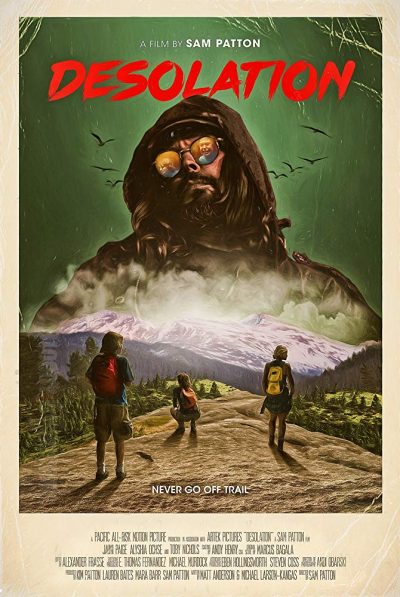 Reasons not to go camping, #274. Although actually, on that list, “Getting stalked, kidnapped and butchered by a mysterious silent psychopath” probably ranks slightly below, “Having to hang out with Abby, Sam and Jen.” While the cause of Mr. Abby’s death is never explicitly stated, I’m betting he committed suicide, to escape having to spend any more time with them. Certainly, after 30 minutes of their earnest chatter, I’d be running towards that masked figure, holding a machete. I’m not sure which is worse: horror movies which make no attempt to create characters, or ones which spend too long on doing it badly.

I’m inclined to go with the latter. Because in the former, it’s usually a result of them putting all their effort into gory, imaginative kills rather than deep, meaningful dialogue. Here… not so much, for the film makes the fundamental misstep of presuming we care about the relationships between the three victims. Even when things eventually start to go wrong – and that takes about twice as long as I’d have liked – it’s almost inevitably off-screen. What kind of slasher film is it, where a good defense lawyer could probably get the perpetrator off, based on the evidence contained in the movie?

Remarkably, the film still manages to go downhill: of all the flaws possessed by the first half, the main one was that the material was just in the wrong movie, not the angsty family drama it needed to be. The second has no such excuse. It’s just bad, uninspired stuff you’ve seen a million times before, in other “psycho in the wilderness” flicks. Really: if you’re not even left with a strong resolution to stay out of the woods, what’s the goddamn point of having a horror movie set in a forest?