One of those “Where do I even start…” films, which we watched because of the presence of Combs, who is always value. That’s certainly true here, even though he doesn’t technically appear in this, since he’s just doing voice-work. Specifically, he is playing a colony of mould which springs up in the bathroom of Ian (DiGiovanni), who is currently on a 16-month (and counting) bender of staying in his apartment. This involves eating pizza, watching his beloved old television set (named “Kent”), and admiring his neighbour Leah (Doetsch) through the apartment peephole. Quite how this all works is unclear: who is paying for the pizza, rent and other essentials? Since his thuggish landlord (Giovagnoli) swings by more than once to collect overdue payments and tell intimidating anecdotes about how hard it is to break a chimpanzee’s arm. 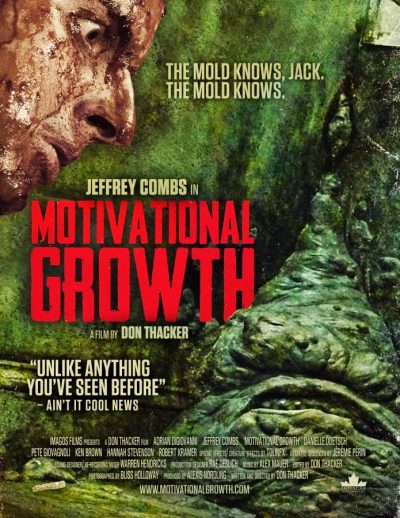 Still, let’s breeze past that, as the film does. For after the TV breaks down, Ian’s already tenuous grasp on sanity seems to go with it, and he tries to suffocate himself in the bathroom with home-made chlorine gas. Failing in the attempt – as he has at life – Ian topples over, banging his head. This is where the chatty fungus comes in, and after some initial doubt on Ian’s part, becomes a life-coach. The human cleans himself up, and actually turns out to be capable of beginning a relationship with Leah. But this is a jealous mould, and one which has no interest in letting its pupil become fully independent. There’s more than an echo of Frank Henenlotter’s Brain Damage here, sharing that weird, semi-symbiotic relationship between a man and his inexplicably well-spoken yet psychotic organism.

It’s surprisingly entertaining – well, for a film which takes place entirely in the single location of Ian’s apartment, and which for large periods consists of a man talking to a fungal puppet. I still have no idea how much of it takes place in the real world: it could be that everything post-suicide attempt is entirely delusional, with the mould being a manifestation of Ian’s super-ego, or something like that. There certainly is stuff going on which has no basis in reality, such as the scene where Ian see his own corpse, rotting on the bathroom floor. Or maybe that IS the reality – his attempt to kill himself actually succeeded – and everything else is illusion?

The film never bothers reaching a conclusion on this, Thacker seeming content to sit back let the weirdness unfold as it may. That is a cop-out, and the film definitely needs both a greater sense of escalation and a more memorable finale: I already can’t quite remember how it ended, and only saw it on Friday. Though you can understand that approach, since Combs is as good as expected, sinking his teeth into voiceover work enthusiastically. Who really needs more? Bonus points for nice use of animated interludes, and for a retro, 8-bit soundtrack that bleeps its way around as accompaniment. It’s probably not something I’m ever going to watch again, yet can’t say I felt like the time spent had been wasted. If you see only one film about a talking fungus this year… it’s probably going to be this one.