There’s an urban legend about a mysterious arcade game called Polybius, supposedly created and distributed in eighties as s part of a government-run psychology experiment out of Portland, and designed to twist the mind of the players. Take that, throw in the plot, and certainly the style, of Videodrome, and you basically have Sequence Break. Oz (Williamnson) is the sole employee of a company which restores, sells and maintains old video-game cabinets. When his boss is out of town, two things happen. First, he meets customer Tess (Therese), who is pretty much his dream girl. Secondly, a package shows up, containing a game circuit-board. When installed, the resulting game proves to be both highly addictive and disturbing. Oz is affected by increasingly bizarre hallucinations, while the game’s cabinet grows ever more organic. 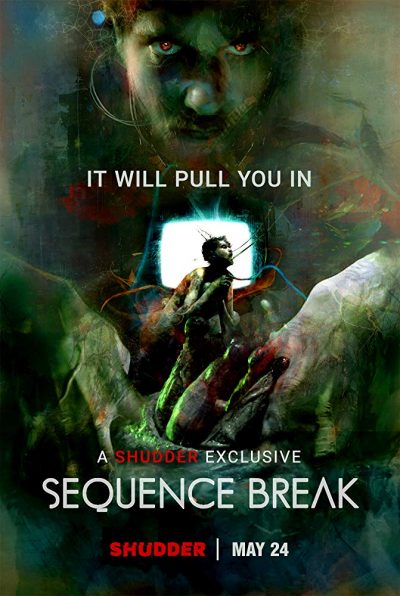 I think the main thing I took away from this was a new appreciation for just how awesome Videodrome is, in the same way that eating a tofuburger renews your love for the real thing. For this has the same kind of shape as Cronenberg’s masterwork (#ChangeMyMind), it just doesn’t have any of the necessary flavour. Indeed, I’m not entirely sure it has any flavour at all: it lacks a sense of escalation, or even a world-view outside the garage workshop, and offers little in the way of true resolution. Of course, in that last department, it’s going up against one of the most killer endings in genre history. You can’t compete with Videodrome in that department. Still, might have been nice if Skipper had put in at least a token effort to that end.

Even the characters have almost direct parallels. Oz is the Max Renn character. Tess matches up with Nikki Brand. And there’s a vagrant, who pops in and out, offering mysterious philosophical musings, just like Professor Brian O’Blivion. About all that’s missing is Barry Convex – and he’s badly needed, to explain what the fuck is exactly going on. The performances come up rather short too, being almost uniformly bland: Oz is a generic nerd, while Tess is just a generic nerd’s video girl made flesh (she’s pretty and likes video games!). Though it’s clear Skipper is just as much as fan of eXistenZ, especially when the machine begins to mutate, approaching the border between biology and technology.

The result here is instead extremely good at delivering the gloopy sizzle, just providing nothing sufficient into which I could sink my teeth. On re-reading what I’ve written above, it sounds rather harsh. As a Cronenberg fan film, it’s decent, and this could well be an engaging and trippy mind-twister, if you have never seen Videodrome,. However, I have. Quite a few times. So when the hero presses his face against the soft, gently yielding glass of the screen and into it, the reaction here was more a rolling of the eyes, than the combination of disgust and intrigue it provoked when James Woods did the same thing in 1983.