Eve (Santos) is a nurse, who encounters a stabbing victim on the front steps of an apartment building. Entering it in search of other injured parties, she suddenly finds herself in a completely different, unexpected world. It’s a sprawling maze of corridors and rooms, ruled over by a high priestess called Clarity (Horne), leading the inhabitants in worship of an unseen deity called Mother Darken, whose blood sustains them. No-one can seem to remember what the world was like before, but Clarity and her acolytes pursue with ruthless zeal the “exiles” – basically, anyone who dares question Clarity, and by extension, Mother Darken. That includes Kali (Adeliyi), who rescues Eve and together, they have, first, to survive, and second, learn the truth about Mother Darken. 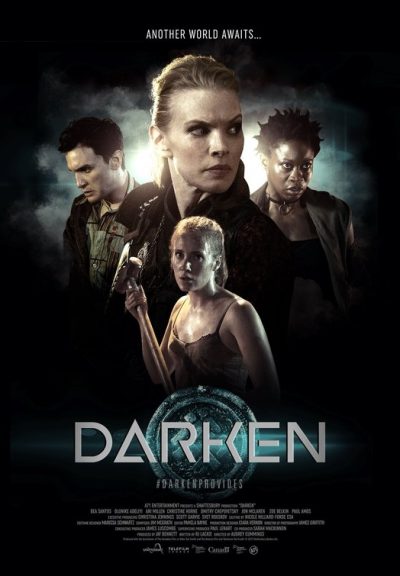 There is, apparently, an 11-part webseries prequel to this on YouTube: Darken: Before the Dark. I didn’t find that out until after seeing this, and wonder if watching it might have made a difference. For, as a standalone movie, this feels considerably underwritten, with too many gaps that are left for the audience to fill in. I don’t exactly require everything to be laid out in detail, but an explanation of who these people are, what they are doing and how they got there does not seem too much to ask, is it? For even at the end, those three basic elements are little if any clearer than they were 85 minutes previously. Then there’s the thorny question of why this alternate world looks mostly like a badly-lit school in the middle of an ill-considered renovation project. Well, that one’s actually answerable: it’s all the budget could afford.

This isn’t an entirely bad thing, but it’s the kinda story which feels like it could be a mid-level Doctor Who episode. You can imagine the TARDIS phasing into view in some quiet corner, and the Doctor popping out to square things away. There’s certainly enough running around to qualify – and to be honest, Santos is not exactly David Tennant, in terms of charismatic charm. I did like Horne, who gives Clarity the kind of iron will you’d expect from a cult leader, and Millen (whom you might recognize from Orphan Black) as her second-in-command, has the kind of loony devotion that’s both disturbing and effective.

Maybe the film should have been more about them, and their rule over the land of Darken. It might have been more interesting, considering the surprising ease with which Eve is able to meander her way into the truth about the goddess whose energy appears to be all that’s holding the place together. Leaves me wondering why Kali, or anyone else, hadn’t stumbled across it before. Whatever. The ending may be the most intriguing thing the movie has to offer, and overall, I suspect that a single feature is probably not the best format to explore the potential present. There’s no lack of imagination here, just not enough resources to do it all justice.