It has been seven years since the original movie, and for any technical improvements this may offer over its predecessors, it loses considerably more in terms of heart and wit. I mean, this is still making Sarah Palin jokes. Kids, ask your parents! A couple of decades after the event of the original, the moon is the last refuge of humanity, and is teetering on its last lunar limb, with engineer Obi (Rossi) forever trying to keep things going with duct-tape and hope. An encounter with the skulking leader of the moon Nazis (Kier) sends her on a mission to the center of the Earth where Vril aliens have an energy source which could save mankind. 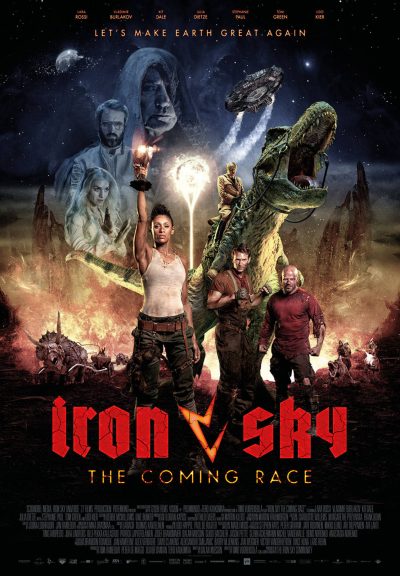 On its own merits, as a straightforward comedy/SF romp, this is fair enough. It has some genuinely good ideas, such as the idea of a cult who worship Steve Jobs and Apple products (presided over by Green), which provide most of the film’s biggest laughs. And the Vril are shape-shifters, allowing the film to use forms covering everything from Caligula to Margaret Thatcher. You can’t genuinely hate any film with a scene where the heroes are pursued by Osama Bin Laden and Pope Urban II, sharing a chariot pulled by a triceratops. It all feels not dissimilar to the Sharknado franchise: thoroughly self-aware of its own stupidity, and the degree of your appreciation may well depend, on how prepared you are to go along with this approach.

I’m still not sure how much I liked it. I’ve changed the grade above three times already, and remain uncertain whether this accurately reflects my opinions. Technically, it’s great, the equal of far larger budgets in Hollywood. I’ve seen a lot of this lately: whether it’s Russia, China or Europe, in terms of putting money up on the screen and getting back for your non-buck local currency, Hollywood has been far surpassed by other countries’ movie industries. We’ve seen film-makers take advantage of cheap Eastern European locations for their movies; I wonder if we’ll find more post-production work also being handled similarly?

But what’s missing is… soul? Iron Sky was so lovable, largely because you got the sense it was a bunch of film-loving geeks, making a film entirely for their own amusement, and not giving a damn about anyone else. The greater polish here, leaves me feeling more has been subtracted than added, considering it’s often the rough edges which give low-budget cinema its appeal. Recycling an 1871 novel by Edward Bulwer-Lytton doesn’t reach the standards of “Moon Nazis!”, in terms of high concept. Even Laibach, once again providing the soundtrack, seem almost restrained in their grumpiness. Kier and Green’s supporting roles are probably the only reason this might stick in the mind, with neither Rossi, and in particular not Burlakov as her Russian refugee sidekick, making any impression. Given how long I’ve been waiting for and eagerly anticipating this, it has to be classed as a disappointment.