I’m surprised there aren’t more movies exploring the intersection of Christianity and zombies. After all, the faith is predicated on someone coming back from the dead. Then there’s John 6:56, which is basically the high-concept for every zombie film since Night of the Living Dead: “Whoever eats my flesh and drinks my blood remains in me, and I in them.” This isn’t quite there: for the first hour, it’s more your standard nunsploitation, though definitely needs more nekkid novices [Nigel Wingrove sighs disapprovingly]. But it comes a good bit closer than I expected. 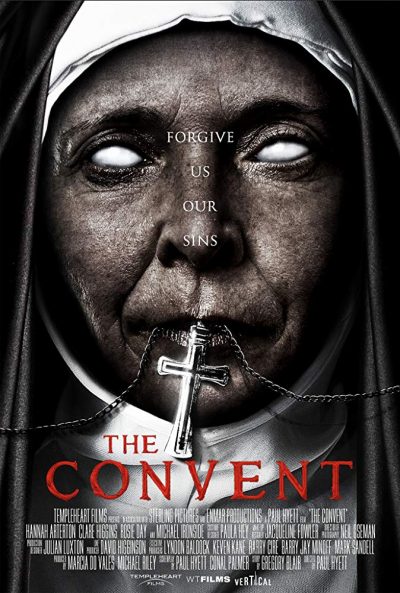 After a brief prologue, whose significance only becomes clear a LOT later, we’re in 17th-century England, where Persephone (Arterton) has just been sentenced to death for witchcraft by the local magistrate. Though “local” is relative I guess: this judge sounds distinctly Canadian, since it’s a cameo by Michael Ironside, eh? Before the sentence can be carried out, Persephone is “rescued” [I’m using up my quotes quota quite quickly…] by the Mother Superior (Higgins) of a local convent, who is always on the hunt for fresh meat. Naturally, this isn’t the kind of religious establishment where the residents frolic across Alpine meadows. Though the Mother Superior does certainly ponder how to solve a problem like Persephone. Not the least of whose issues is, being named after the queen of the Greek underworld. Heretic! Blasphemy!

It’s obvious from the start there’s something seriously wrong both the place and its inhabitants. But Pers doesn’t exactly have options, being under penalty of execution in the outside world. So she can only stay in this exceedingly poorly-lit place, as both creepy incidents and sickness mount, the Mother Superior punishes disobedience severely, and information about the convent’s sordid history of occult-dabbling dribbles out, at the glacial pace needed for the plot. Higgins is good value, even if I kept expecting her to go berserk with a ball-pen hammer; however, the rest of the performances are little above student drama productions. Combined with having to peer through cinematography so dark, I wondered if the studio had forgotten to pay their electricity bill, it’s not very interesting.

However, the final 20 minutes, where the past comes back to bite the present with a hungry vengeance, is not bad, combining demonic possession with an adequately splattery appreciation for eye violence. It stands in sharp contrast to the strenuous (and largely failed) efforts at generating atmosphere which drove this for its first hour. Entertaining though this finale was, it came as too little, too late. Indeed, such is its marked difference, you have to wonder if the producers required its insertion for the purposes of marketing, realizing the snooze-fest they otherwise had on their hands. Certainly, if you’ve seen the trailer, this concentrated – probably wisely – on the more straightforward horror aspects. But even if this took too long to get to the good stuff. I want there to be a sequel, purely so it can be called The Convent 2: The Nun-discovered Country.