Well, this is certainly… different. On the one hand, it could be a Disney Channel Movie of the Week. For the basic story is that of a young girl, Lili (Psotta), separated from her beloved dog, Hagen (played by a pair of canine siblings, Bodie and Luke). She is forced to spend the summer with her estranged dad (Zsótér), because Mom is off abroad for work. Dad ends up dumping Hagen by the side of the road, and thereafter, the film is mostly about his adventures as the girl and her dog look for each other round the streets of Budapest. So far, so Lassie Come Home. 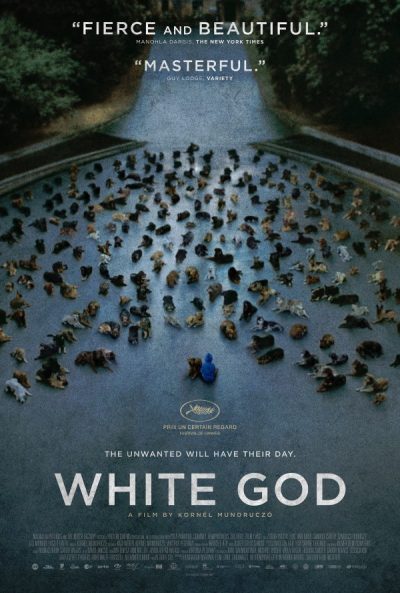 Except: hell, no. This is some harsh shit, which perhaps has more in common with a canine version of Death Wish. Because Hagen ends up sold to a dog-fighting trainer, who subjects him to a brutal (and quite hard to watch) regime, to prepare Hagen for his first fight. Though he eventually escapes, the training has given Hagen a very particular set of skills. When he’s captured, and taken to the local pound, that just gives him an army. And when they break out, it’s time to take revenge on the two-legged bastards who made him the killing machine which he has become. Considerably more Rise of the Planet of the Apes.

This is bizarre, and yet, quite fascinating, especially towards the end, when the pack roam the eerily deserted city centre. Unfortunately, the film also tries to make it some kind of coming of age story for Lili, who is going through the usual teenage process of being rebellious and yelling “I hate you!” at her dad. That is considerably less interesting: as a parent, I’ve lived through this, and have no desire to see it re-enacted on-screen. The other problem is a script which doesn’t know what to do when it gets to wherever it’s going. The film doesn’t so much end as stop – literally, lying down in the middle of the road. And it’s sometimes far too heavy-handed in its metaphors, such as Dad being an inspector in a slaughterhouse.

Despite this, there are many striking images and sequences, and it’s a movie which often manages to pull on the heartstrings without ever being maudlin or trite. Liszt’s second Hungarian Rhapsody, which Lili plays as part of an orchestra, features heavily on the soundtrack. You (and certainly, I) might know it best as the basis for classic Tom & Jerry short, The Cat Concerto. And lo, there’s a scene at the dog-pound where the inmates, like so many jailbirds, are staring entranced at a TV playing exactly that. I definitely can’t call it a perfect film; far from it. Yet even when Mundruczó fails, he manages to do so in generally interesting ways. If I may never watch this again, it’s not two hours I consider wasted. And I might just treat our pooch with a little more reverence, going forward.