Set in a somewhat indeterminate future time and place, Grey Trace finds himself a quadriplegic after a car-crash and subsequent attack by four men, in which his wife is killed. Eccentric billionaire inventor , sorry, Eron Keen (Gilbertson) offers Grey a way to get out of his wheel-chair, by becoming a guinea-pig for Eron’s latest invention: STEM, a chip which can give him back control over his body. However, this is not authorized medical research, so Grey must continue to pretend to be paralyzed, as far as everyone else is concerned. It quickly turns out STEM is considerably more than a tool, being intelligent and self-aware. With STEM’s help, jacking his physical abilities to superhuman levels, Grey begins tracking down those responsible for the attack, and drawing the attention of Det. Cortez (Gabriel), who keeps finding connections to Grey at gruesome murder scenes. But he may not be the only “enhanced” human – and STEM is not an entirely benign or passive upgrade, either. 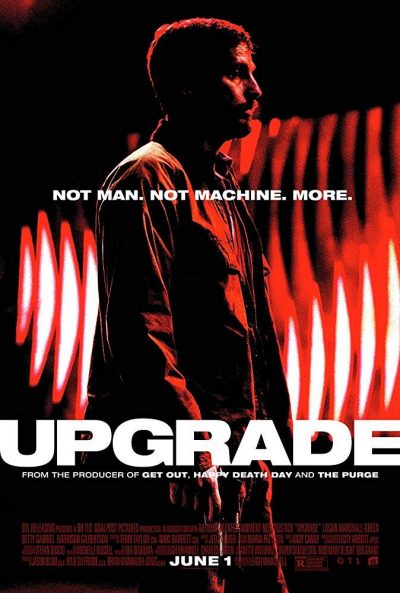 What starts off feeling like a Robocop knock-off eventually finds its own footing, though in ways perhaps not quite as effective. That’s no great stigma though, and for a pulpy slab of ultraviolence, it hits most of the right spots. You’d expect no different from a co-creator of the Saw franchise like Whannell.  I was surprised this is only his second feature, after Insidious 3: it feels considerably more assured than that. I can only presume he was paying attention, during all the time spend hanging round film-sets with colleague James Wan. It’s a convincing future, with self-driving cars and touch-screen table-tops. There are also impressive cityscapes, which serve no particular purpose – yet are still cool, if strangely underpopulated. At times, it feels like the only people in the movie, are the people in the movie.

Where things really kick off are when Grey lets STEM take over, with under-cranked violence, to give the impression of Grey’s superhuman speed, which echo the best the Terminator franchise had to offer. This is especially so, when he is going up against another enhanced human. For in this future, that’s far from uncommon: you can even get firearms implanted into your body [which gives a whole new meaning to “handgun,” hohoho. It’s not the only moment at which I caught a whiff of Cronenberg]. That’s just the start: possibly the film’s most imaginative moment has lead villain Fisk (Hardie) literally sneezing someone to instant death, which must be close to a first. I’d love to have seen more of this, since Grey’s blunt-instrument approach is considerably less elegant. In this kind of movie though, you take what you can get. And what you get is something with a sharp flavour of grindhouse to it – albeit in tone and content rather than Whannell’s considerably more polished approach. If this is any indication of the low-budget pleasures we can expect, I’m very interested to see what he creates going forward.