“A true hero is always a cripple.”

Most countries have a local film industry, whether we know about it or not. Indonesia, for example, had been churning out martial arts films for decades, before The Raid brought the country to the West’s attention. The same goes for Thailand, which had been making action films aimed at the local market, and laying the groundwork on which Tony Jaa would vault to stardom. While Cobra Thunderbolt never received an official release in either the US or UK, an English-dubbed print was released in Japan, among other places, and has since circulated around the usual sources. While this is writer-director Srichua’s sole IMDb credit, he does seem to have a lot more work to his credit, at least as recently as 2009’s Deathwave. A disaster film in more than one sense, it cost 160 million Baht, and took in a mere five million which, according to Wikipedia, helped lead to Srichua attempting suicide. 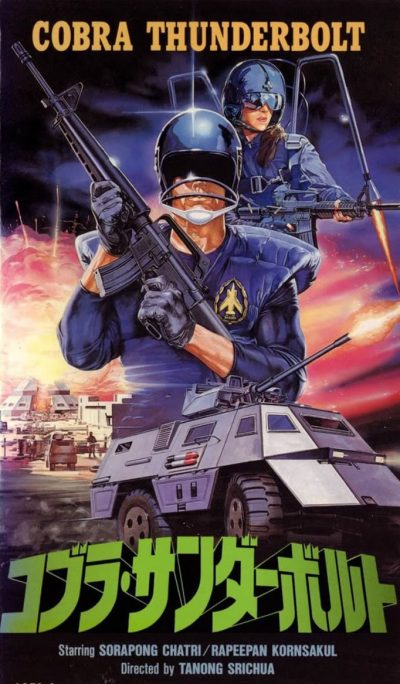 You have to admire that kind of commitment to your art. Can you imagine if those involved in box-office bombs in Hollywood committed seppuku in front of Mann’s Chinese Theater? But in this case, it’s only the viewer who might contemplate self-harm, or at least faking some kind of seizure to get out of watching it. Though, to be fair, the eighties were kinda variable, even in the West. For every Die Hard, there was a Gymkata; for every Aliens, a Samurai Cop. With a sample size of…er, one, it’s hard to tell how representative Cobra Thunderbolt might be of Thai action flicks from that time, or into which category it should be filed. But say what you like about the quality of the plot here, there’s certainly no shortage of it.

The main villain is arms dealer Kangwan, who is happy to sell to anyone, despite the attentions of investigative reporter Emily. You can tell he’s the bad guy, because his idea of sexy pillow-talk is  “You know, I really liked Idi Amin.” Kangwan is seeking new weapons, and seems to have his eye on the battle vehicle of the title, created by wheelchair-bound veteran Colonel Dave (Srivilai).  I say ‘seems’, since this is very much a movie where stuff just… happens. For instance, after we first meet the Colonel, we are suddenly in the middle of a battle scene, and it’s far from immediately obvious that it’s a flashback explaining how Dave became disabled during a mission to Laos. That only becomes clear when we cut back to him, staring vacantly off and aimlessly wheeling around. He has a pal, former army buddy Dick (Chatri), who has been in prison for 10 years, because… Well, that’s never adequately explained.

Col. Dave demonstrates the 6,000 horsepower, all-terrain and heavily-armed Cobra Thunderbolt for interested parties, including the military and Kangwan. It’s driven by his only daughter, Lt. Molly – apparently, surnames are entirely optional in the Thai military. It’s clear she gets this fondness for action from her mother: we first meet Mrs. Dave waving a samurai sword around. “You’re so good at everything,” crows Molly. “Thai boxing, hand-to-hand combat, archery, swimming, parachuting, etc. etc.” However, cooking is not apparently among her skills. Mom tells her daughter, who has just driven all the way from army headquarters, “You must be tired and hungry. Why don’t you get yourself something to eat?” Guess that sword won’t wave itself…

Colonel Dave spurns Kangwan’s advances, in part because he supplied the weapons responsible for the Colonel losing his legs. Sheesh, some people just can’t put the past behind them, can they? So the arms dealer switches to plan B, and Mrs. Dave quickly discovers that a samurai sword is no match for anaesthetic gas. The cops show up to investigate the kidnapping. Dave’s co-operation is limited, to put it mildly, though it’s nice he lets Emily wander into their house unannounced for journalistic purposes. [I must confess to being rather distracted in this scene, by the unexpected appearance on the soundtrack of Ennio Morricone’s score for The Thing.] Anyway, Kungwan calls the Colonel, and offers to exchange Mrs. Dave for the Cobra Thunderbolt blueprints. 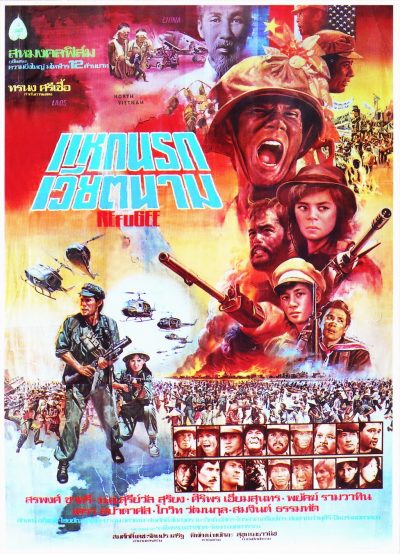 Dick breaks out of prison. I’m going to assume this is after reading about the kidnapping in a newspaper, though since it’s entirely in Thai and the dubbing doesn’t bother to translate it, I can’t be sure. Admittedly, “breaks out” is a bit of an exaggeration too. Security on prison work details in Thailand prisons appears remarkably lax, and Dick’s escape consists of him jogging away from the guards. He then steals a motorcycle, because the director suddenly realized it has been at least 10 minutes since the last bit of vehicular mayhem, and there is consequently some catching-up to do. Dick’s driving skills appear to be a bit rusty, going by the fact that he seems better at bumping into things then avoiding them, but he teams up with Emily, who drops him off with Col. Dave, because… Nope, no idea.

The kidnappers deliver a message by arrow, setting a place and time to swap their captive for the blueprints. This doesn’t go quite as planned, with Mrs. Dave discovering that all her skills in [copy… paste] Thai boxing, hand-to-hand combat, archery, swimming and parachuting, are no match for an explosive vest. Dave seems largely unfazed by his wife being distributed thinly over a wide area, saying, “We can’t do anything for her now.” While technically true, it feels more like he has lost a pair of shoes than a spouse. Emily shows up again while the police are investigating, and seems to have carte blanche to wander in and out of crime scenes, taking pictures of corpses. Mind you, the cops are there only for two minutes before peeling out in a screech of rubber. I suspect that clearance rates are fairly low for Bangkok authorities.

Dave has now reached the They Pushed Him Too Far part of proceedings: “Considering all the time and effort that you and I have spent constructing this armoured car, I believe your mother would be very disappointed if we didn’t take revenge.” But before heading out, he goes all Julian Assange on Kangwan’s ass, dumping a folder of information on Emily. Its publication triggers retaliatory threats from the arms baron, and Col. Dave is kidnapped – because, of course, abducting members of this family worked so well when he tried it the first time. We learn that, according to Dave, “The Cobra Thunderbolt was designed to protect human rights – and FREEDOM!” Because nothing says “freedom” better than a 50 mm artillery gun with a 360-degree radius and a pair of M-60 machine guns. Oh, and did I mention the rockets, clearly tipped with human rights? 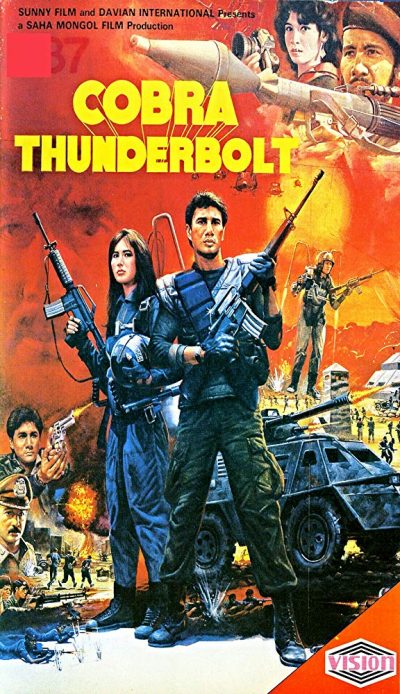 Since the Colonel is abducted, and Molly in police custody at the hospital after being injured in the kidnapping, it’s up to Dick to drive Cobra Thunderbolt – wearing an Oakland Raiders football helmet, because…. You guessed it: d) Don’t know. Unlike Dave and Molly, the good news is, he does appear to have a last name. The bad news is, if I’m hearing it right, his name is Dick S’mores. I opted not to Google that. He’s attacked, though in a fairly crap fashion: one guy comes at him, swinging a samurai sword, apparently having completely forgotten the machine pistol slung across his back, surely a better choice. Or maybe he just didn’t press the F key to switch primary and secondary weapons? Molly breaks out, and they team up, charging off in Dad’s vehicle for the assault on Kangwan’s compound. There, the Thai army, who showed up out of nowhere, are getting their asses handed to them by the private contractors.

But, wait, there’s more! For it turns out Dave’s inventiveness was not limited to wheeled vehicles. Molly is whizzing around above the action in a jet-pack like a heavily-armed mosquito. Conveniently, it appears to have a “hands-free” mode, allowing her to fly through the air with the greatest of ease, while simultaneously strafing the ground with her machine-gun. They rescue Dave, who is suddenly able to climb into the turret of the Cobra Thunderbolt. Maybe the whole wheelchair thing was him just being lazy. It all ends in the expected buffet of giant fireballs and stuntmen flinging themselves through the air. Though for a supposedly all-terrain vehicle, Cobra appears to be completely brought to a halt by a small patch of mud and three oil-drums. I will be checking “Somewhat satisfied” on my product review survey.

As ludicrous and nonsensical as this is, if you’re in the right mood, it’s passable entertainment. Admittedly, it took me two attempts to find that mood, with the first falling apart in a ‘let me just potter around in the kitchen and listen to the dialogue’ way. This fell short of my rigorous standards for review purposes, and in particular, Rule #7: you must be physically present in the same room as the movie, for at least 63% of the time. The second effort sustained my interest to at least an adequate level, and I’m prepared to admit the production values were not bad, though any merit the performances might have had was butchered by the atrocious dubbing. All told, marginally competent, and definitely better than the bottom of the Hollywood barrel at that point.