It took me three attempts to type the title above correctly. For some reason my finger was sliding over, and I kept writing a review of a movie called Warning Shit. Sometimes, your subconscious knows best. Because this is the kind of film which relies so heavily on the idiocy of its characters, on both side of the dramatic spectrum, that I feel I lost quantifiable number of IQ points merely by watching it. When David Spade is playing the sharpest tool in your cinematic box, there may be a problem. Though to be clear, Mr. Spade is not the problem here, at least, not in comparison to the script. 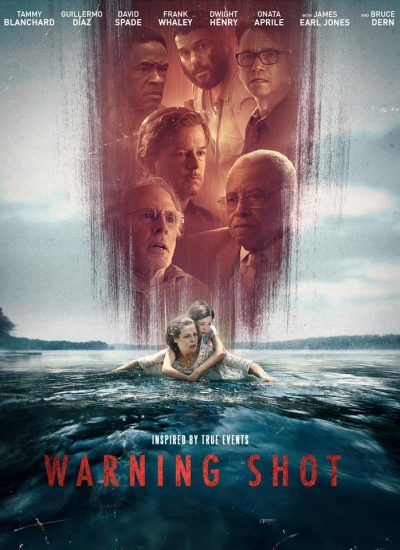 Struggling single mother Audrey (Blanchard) gets what could be a much-needed windfall after her grandfather dies, potentially leaving her his eighty-acre farm. She and her daughter go to check out the property, only to be rudely interrupted by Rainy (Díaz) and Jawari (Henry). They are two thugs sent by Bobby (Spade) to intimidate the old man into signing over the valuable water rights belonging to the farm. Except they didn’t realize he had died, and with the reading of the will days away, are faced with a troubling and unexpected situation, which their tiny minds are ill-equipped to handle. Unfortunately, Audrey and the Jehovah’s Witness-a-like who ends up cloistered alongside her, are no smarter. Otherwise, this hostage scenario would have ended in 10 minutes, and we could all have got on with our Saturday afternoons.

Rainy is easily the most irritating character. This seems to be aiming for a Dennis Hopper in Blue Velvet vibe for him, giving the impression of an utter loose cannon, who can do anything to anybody at any time. Do you want to know how the film puts this over? By having him lick bird poop off a car window. I’m not making this up. It was completely impossible to take Rainy seriously as a threat thereafter. Even with this early stumble, there is some potential in the claustrophobic setting. Only the film keeps leaving the house, in order to enlighten us about what Bobby is doing on the outside, which neither matters nor is of any interest. And at the end, Audrey and daughter eventually break free, leading to a chase through the forest. Which might have worked better, if it hadn’t been completely at odds with any close-quarters tension previously accumulated.

The number of points at which I shook my head as the people involved made poor decisions was quite startling. That’s not even including the ending, with a twist which I imagine is supposed to be “ironic”, since it renders more or meaningless all the mayhem, carnage and loss of life which preceded it. Unfortunately, this is just another misstep from the writer, since it also renders more or less meaningless the 90 minutes which the viewer has invested in watching it. While there are some other familiar names in cameos – James Earl Jones as a lawyer, Bruce Dern as Bobby’s father – this isn’t the kind of film anyone will be touting on their resume.