Clearly inspired by another faux-grindhouse Canadian film, Hobo With a Shotgun, this goes for the same jugular but doesn’t quite manage to sink its teeth in as effectively. Father Augustus Bane (LaPlante) is a priest ministering to a hellish section of urban life, and can’t even enter his own church without being mugged for the communion wine. While paying a visit to the Bonner family in his parish, their home is invaded by the MacFarlane gang, led by patriarch Dokes (Rawley), who rape or kill most of the inhabitants, leaving only Bane and daughter Amy (King) alive. Traumatized by the event, he turns to violence, acquiring a gun which he names “Lord”; assisted by Amy, he begins a relentless campaign to clean the scum off the streets. 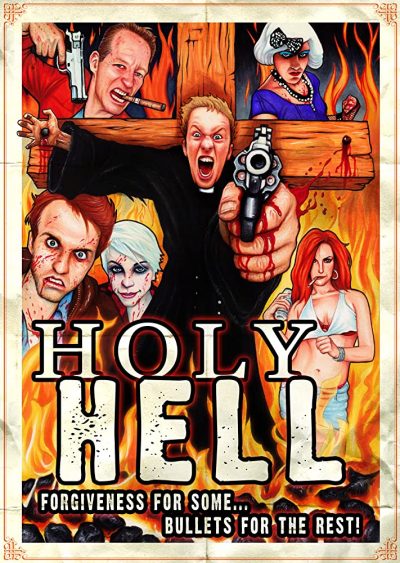 I was rather nervous about LaPlante not just writing, but also starring in this – that’s often a sign of a vanity project. However, he’s by no means awful, especially delivering some deadpan bad-ass lines, such as “Do I look like I’m running for Jesus?”, when a victim tries to remind him about the whole ‘Thou shalt not kill’ thing. On the other hand, he’s not Rutger Hauer either, and the film doesn’t do a good enough job of getting you on Bane’s side. The home invasion starts just seven minutes in: it seems clear LaPlante (with his director’s hat on), is only really interested in the vengeance and mayhem, so gallops towards it with little more than a token attempt at characterization.

The other issue resulting from this, is it leaves a long way for the film to go, and I felt it wasn’t able to sustain itself, running out of steam before the end. It needs to escalate, yet in terms of gratuitous offensiveness, arguably peaks with the slaughter of the family. There’s also too much bad CGI splatter: if you’re going for an eighties-style video approach – the colour grading and fake artifacts indicate that was definitely LaPlante’s aim – then you need to remember those kind of movies always had 100% practical effects. They may have been crap, but the blood was corn syrup, not pixels. And duct-tape on the nipples? Really? That’s not very grindhouse, is it?

That said, there is still plenty which should offend a contemporary viewer, not least some thoroughly unflattering portrayals of the mentally challenged and alternative sexuality, including the McFarlanes having an army of psychotic “He Shes”. We also get the immortal line, “I can’t believe you really shot the midget!” King offers decent support as the crippled survivor, and Rawley chews the scenery to reasonably good effect, even if again, he’s not Brian Downey. All told, I was amused, though the similarities to Hobo are just too great to overlook, and this comes out on the lesser end of the comparison, in virtually all departments. But if LaPlante can find his own road next time, I’ll certainly be prepared to give him another chance.