Seth (Costanzo) and Polly (Wagner) are intending to have a nice weekend camping in the country. It doesn’t go quite as planned. In increasing order of catastrophic intensity, they experience the following. Their tent breaks. Their car is hijacked by escaping criminal couple, Dennis (Whigham), and Lacey (Krebs). They plough into something on the road, bursting the car’s radiator. And the garage into which the four pull over, has an attendant who was recently infected by a highly malicious and infectious parasite, which is capable of taking over anyone with even the slightest contact.

This, folks, is an excellent example of the reasons why we do not camp. That kind of shit doesn’t happen when you stay in a Holiday Inn. 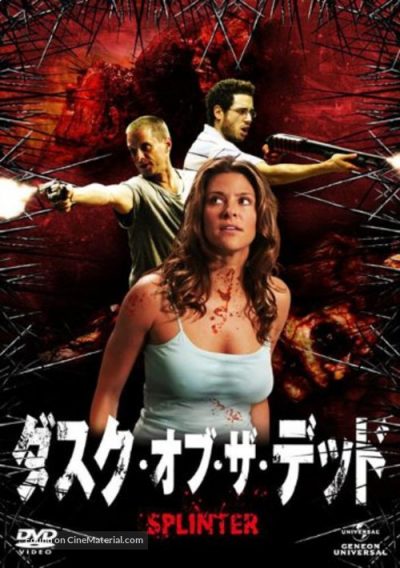 Prejudice confirmation aside, it offers a briskly energetic tale with a decent, imaginative monster. What we see of the creature outside of its hosts, is basically a series of oily spikes – hence the film’s title. Once it is inside a victim, however, it can warp the flesh in thoroughly unnatural ways. Ways beyond the limits of regular bone and cartilage, not dissimilar to The Thing. And if you sever a piece, it is quite capable of operating independently of the main body. How can you stop a creature like that? Fortunately – or conveniently, if you prefer – Seth is working toward a PhD in biology, so has some ideas, and Polly is a bit of a “firecracker”, as Dennis puts it.

I do wish that we’d got to see more of the monster. Perhaps for budgetary reasons, Wilkins keeps shaking the camera violently, just about every time it’s on screen, making sure the audience rarely gets a good look at it. Instead, the bits most likely to stick in your mind may well be the crunchy body horror as limbs contort as they shouldn’t. Though I’m unsure whether the “enthusiastic amputation by breeze block” scene – an inevitable result of the equally inevitable infection suffered by one character – quite qualifies. It’s a little less… cerebral than the usual Cronenbergian standards.

It was a bit odd watching Wagner battle parasites of indeterminate origin (there an early hint at them being freed by geological exploration). We previously had only seen her interviewing contestants on Wipeout, and this is about as far from that as imaginable. Still, save the odd reaction shot where we imagined inserting an especially rough fail, she and the rest of the cast generally get it done. Though the sequence where a deep-frozen Seth is walking… very… slowly… to a police car felt about as contrived and artificial as a WWE ladder match.

There are no surprises in the final destination, and not many on the road there either. Yet on occasion, that’s not necessarily a bad thing. We’re here as much for the familiarity of the scenario as its novelty. The innovation present here is instead applied to the monster, and that’s the way it needs to be.