It has been a very long time since we reviewed any true hardcore pornography here – maybe Cicciolina’s Racconti Sensuali back in TC…2? Not for moral reasons, just because we find it difficult to write anything meaningful about them. And that’s the case here – because make no mistake, this is not a grindhouse flick with hardcore elements, it’s a hardcore film set against a grindhouse backdrop. Again, no moral judgment there, but you should certainly know what to expect. Like the Rodriguez/Tarantino collaboration, there are two separate, independent features here, Student Assassin and Massacre at Pine Lake, though the only real nods beyond that are the “drive-in” style intros used and an amusing (faux?) trailer for Easter, a film in which the Easter Bunny goes on a murderous rampage. 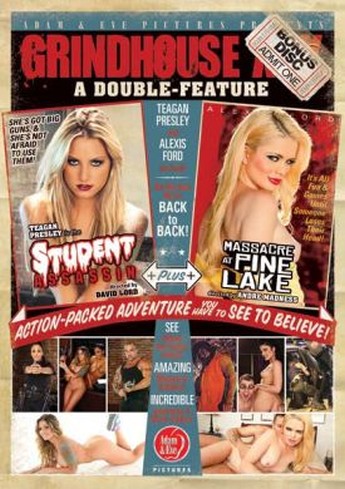 Assassin is the weaker, due to the almost complete absence of any plot. Nina Mercedes is a cop kidnapped by a drug-dealer she’s attempting to arrest. Live-in lover Presley, fortunately moonlights as a contract assassin (in order to pay for her tuition at a community college. No: really), and runs to the rescue. Obvious questions, like how she knows where Nina is, are completely ignored, since it’s very, very obvious where the focus is for this one. Seriously, if you removed the sex, you might have 6-7 minutes left. I’m tempted to edit it out, to make a girls-with-guns short, but as a result, the storyline and characters are basically non-existent. Was amused to find ourselves fast-forwarding through the porn in search of a storyline; does that mean I’m getting old? Massacre fares considerably better, though the ratio of porn:plot is likely at least 3:1, and the results are as you’d expect. Director Madness does know the tropes of the genre, and there are a couple of imaginative moments showing genuine artistry, most obviously a lengthy steadicam shot, with the camera attached to and facing Ford. We also enjoyed the spoof of the ‘Hide yo kids, hide your wife” video in the end-credits. However, the deaths – which should be as much of the point as anything else – are bloodless and uninteresting.