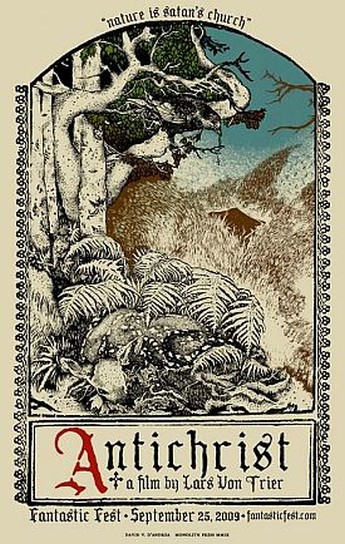 Say what you like abot Von Trier’s films, you will remember them. They may or may not be good, they may even be tedious, and this certainly is excruciatingly boring for chunks – but you don’t forget them in a hurry. And speaking of “excruciatingly boring,” here you’ve got Gainsbourg drilling a hole through the leg of her unconscious husband (Dafoe), and attaching a whet-stone to it, so he doesn’t leave her. And that’s probably the third most-memorable scene this contains; if I described the other two, you wouldn’t believe me. That’s getting ahead of myself. The film is about the nameless couple, devastated (the wife in particular) after the accidental death of their son. The husband is a therapist, who decides the best thing to get her out of her post-mortem depression, is to take her off her meds and go on a trip to their remote country cottage for some peace and psychological counselling. However, rather than healing, it’s more like picking at the emotional scab, and her mental state, already fragile, disintegrates entirely, resulting in all her fears and desires exploding like a volcano.

Lars, you’re one twisted puppy, but it’s amusing to see you can still sneak stuff past the BBFC if you call it “art”. The tone and content are all over the place, from earnest conversation to mad stalk ‘n’ slash, and it’s hard to say what audience would appreciate both. It’s too (pseudo)intellectual for the horror crowd, and vice-versa, but Von Trier is clearly no fan of genre boundaries, even if they exist for perfectly sensible reasons. However, the more I think about this, the more I suspect the film has little to offer beyond its extremities; odds are, few would bother seeing it without them. Is it an attack on therapy? On women? Or just on genitals? Hard to say. The film is so impenetrable as to defy reasonable analysis. There’s a certain point beyond which this feels like lazy film-making, though Von Trier does also deliver some striking imagery. In the end though, it’s not that which will stick in your mind, it’s Gainsbourg’s wielding of the scissors, making this grindhouse dressed up as arthouse.