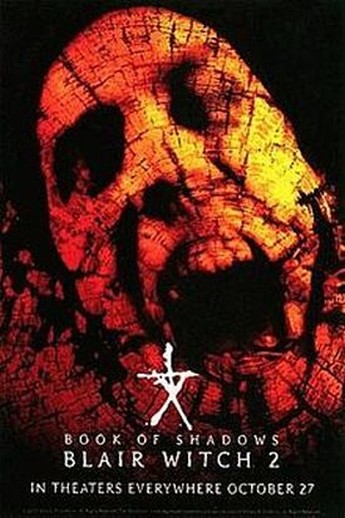 I’m a firm believer that the only thing truly good about the original Blair Witch was its marketing, being about the first ever to use the Internet to generate enormous commercial success, in comparison to its micro-budget. The film itself? Meh. A couple of spooky moments, in a sea of epileptic camerawork, that could only have scared those dumb enough to fall for the ‘real events’ lie told by the makers. The sequel is more conventional, but to its credit – and, unlike certain Paranormal sequels I could mention – doesn’t just churn out more of the same, appreciating the likely impossibility of that. This does refer back to the original, with Burkittsville, the location for it, now over-run with Blair Witch tourists. Jeff (Donovan) is cashing in with his website, and has now branched out into giving tours of the local woods, and the places where the movie events took place. His first group include Goth Kim (director), Wiccan Erica and writing couple Tristine and Stephen (Skyler and Turner). They camp for the first night in the ruins of Rustin Parr’s house and have a brush with another group. They wake up the next morning to find their equipment smashed, but recover the video-tapes from the same spot where the original movie tapes were found, and head back to Jeff’s house to watch them, and see if they can figure out what happened.

With Donovan now the star of Burn Notice, where he plays a range of shady characters, that adds some extra resonance here, likely missing at the time. There is a nice blurring of the lines between reality and delusion, with it never clear how much of what’s happening, is only in the minds of the characters, and it does at least justify its R-rating with more than the potty-mouth its predecessor used. However, it lags badly in the middle, with the participants doing nothing much, except sit around Jeff’s house, save the occasional beer-run, and there are holes in the script, e.g. how can the videotapes show someone putting the videotapes in the spot where they’re found, or the lazy use of Kim’s apparent psychic powers. Obviously, this was made purely to cash in on the (inexplicable) success of the original, but taken on its own merits, it’s not a terrible way to pass 90 minutes. It did at least generate significantly less motion-sickness in Chris than its predecessor, for which I can only be thankful.