The title alone gives you an idea of how understated this is, at least in relative terms. Previous entries in the “celestial object coming at Earth” sub-genre of disaster movies have been called things like Armageddon – I’m sorry, I meant ARMAGEDDON – or Deep Impact, loudly proclaiming on the box what viewers can expect to see. This one opts for a considerably quieter title, and it’s one which describes the hoped-for destination, rather than the apocalypse we meet along the way. Oh, you still get your mayhem, to the point I was quite surprised to discover the budget on this was a mere $35 million. Contrast the two previously mentioned, which cost $140m and $80m respectively, and that was back in 1998. You clearly get a lot more incoming bang for your buck these days. 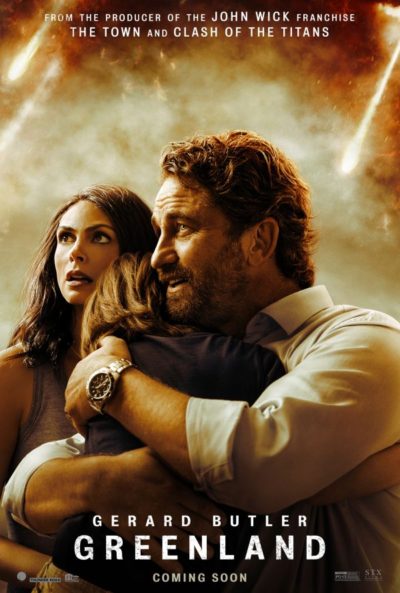 The hero in this is John Garrity (Butler), a structural engineer who is going through (Disaster Movie Cliche #27) marital difficulties with his wife, Alison (Baccarin), which have caused a trial separation from her and their son, Nathan (Floyd). A comet is approaching the Earth, and as it becomes clear this is a bit of a problem, John gets notified that he and his family will be evacuated to a bunker in… yes, Greenland. But before they can board the plane, he is separated from them, after the diabetic Nathan loses his insulin. This unfortunate circumstance sets off a frenetic search on both sides of the marriage, as civilization falls apart, due to human nature and giant fireballs from space. [Werner Herzog nods approvingly]

I got a strong sense of Miracle Mile about this one, which was also about a couple’s panicky quest to be re-united, as the apocalypse approached. Even setting aside the “humans are the real threat,” which is a fairly generic disaster film trope, there are certainly times when the soundtrack here sounds suspiciously like Tangerine Dream. Then there’s the bit near the end where, just when you think they’ve escaped, the vehicle flying them away gets blasted out of the sky. Hmmm… This isn’t as good, of course. The John-Alison relationship simply isn’t drawn as effectively, and nor is there the same, relentlessly increasing sense of terror and desperation. It’s clear from relatively early on, that most of humanity will be proper fucked, and there’s nothing much anyone can do about it.

This is most effective in the early stages, with sequences like the Garrity family trying to slide away to their evacuation point, knowing they’re leaving behind their neighbours – with whom they were partying hours before – to face almost certain death. However, the more this goes on, the closer the tone comes to generic disaster porn like 2012. It never quite sinks that far though, and Butler is a considerably better hero than… whoever starred in 2012. I could Google it, I suppose, but that would imply giving a damn about 2012.  This certainly does a considerably better job of striking the balance between spectacle and emotional drama.