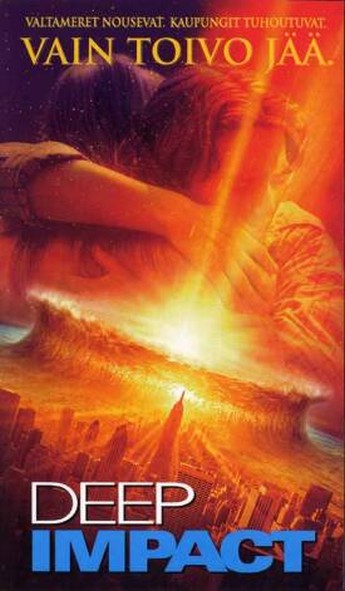 Dreamworks could be getting a rep as a “spoiler” company: Antz vs. A Bug’s Life, and this killer-meteor movie, which came out conveniently before Armageddon. Yet, given their themes, the two films are almost diametrically opposed: their heroes give you some kind of an idea, where Armageddon has Bruce Willis, Deep Impact goes for Duvall. The film has perhaps more in common with co-writer Michael Tolkin’s other apoca-pic, The Rapture, in that it deals with how ‘little people’ deal with big disasters. While still Amero-centric, it’s refreshingly free of jingoism, and up until the last ten minutes or so, is actually a deeply depressing film.

For everything that can go wrong, pretty much does, and mankind’s best hope for beating the asteroid fails before the half-way point. There’s something of the TVM about the film, with an all-star cast (a particularly effective Morgan Freeman as the President) and palette of different characters, yet it’s far more a ‘people’ film than the trailer or sleeve would have you think. The sort of film that makes you want to find someone you love and sniffle gently into their sleeve. Which is great, since getting such gloom out of Hollywood is rare indeed.