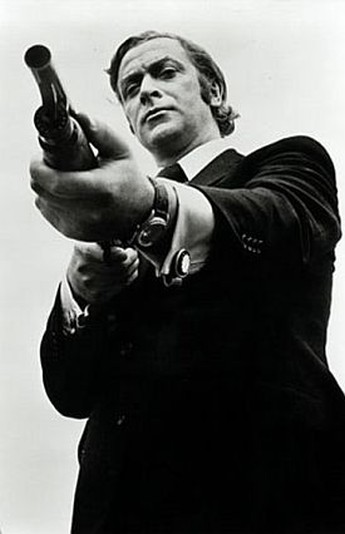 There are films which are great, because of the script, and others that are great, due to the direction. And there are those, like this one, where it’s one central performance that make it memorable. Here, it’s Michael Caine’s portrayal of Jack Carter, a London mob enforcer, who heads back home to Newcastle, so he can investigate the death of his brother in a suspicious “accident”. His arrival, and methods of investigation, cause ripples. Some people are very keen to ensure he doesn’t find out what and who was behind his brother’s death; others are just as keen for Carter to be pointed in the right direction, albeit for their own ends. Turns out that the reason for the accident is probably even more disturbing, and when Jack discovers that… Hoo-boy. He’s not happy, and embarks on a brutal campaign of revenge against all those he perceives as responsible.

This is the best British gangster movie of all time, powered by Michael Caine’s blistering performance as a complete bastard, albeit one for whom it’s hard not to root – he is fiercely loyal to friends and family, and has little or no pretensions, making absolutely no attempt to be other than he is. For self-confidence, brutal honesty (strong emphasis on the “brutal”), perseverance and that loyalty, you can only admire him, despite his callous apathy to human life. Both are clearly visible: contrast the change in expression on his face as Carter sees a certain piece of amateur cinema, and realizes its significance, with the near-indifference as he watches someone drown. It makes him one of the most perfect anti-heroes of all time; Rutger Hauer has had a couple of similar performances, but few others have the charisma to pull it off. As Caine said: “He doesn’t see himself as a bad man. He might do bad things. But he feels completely justified.”

Played as a combination of Western and social realism, the other aspects are damn fine too, not least the Newcastle area locations, which become a non-speaking character all its own (there’s also the whistling wind which percolates through an apartment, adding a chilly loneliness to proceedings). Much as I admire the ending – especially if you come upon it innocently, this ranks as among the most carpet-pulling in cinema history – it doesn’t quite seem to fit. A character like Carter really needs a matching nemesis, and that may be the only failing of the movie. Well, that, and Caine’s thoroughly non-Newcastle accent. It’d take the best part of another thirty years for him to get an Oscar, yet he can have no finer monument than this performance.