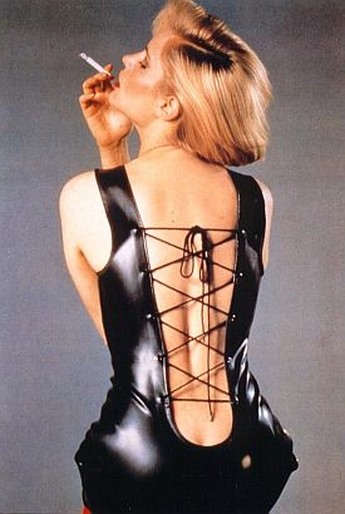 The mundane life of Carol Rivers (Leigh) is interrupted when a lawyer shows up to inform her that her Uncle Fletcher has died, leaving Carol a club, under renovation, in a dubious area of town. Much to the distrust of her mother (Vaccaro), Carol opts to continue the project and moves in above the club, which has a number of other, mysterious rooms. A series of incidents suggest that she might not be alone there; she is also assaulted by a trio of rapists (including Steve Buscemi!), although the police won’t take her case seriously, due to a history of substance abuse and previous psychological problems. Turns out her new venue was less a regular night-club, than a sex-club catering to fairly-depraved tastes. Since one of the rapists was shot by the cops, an internal affairs office (Coyote) is assigned to the case, and strikes up a relationship with Rivers. But is Sharpe who he claims to be? What are his intentions, and what is the truth about Uncle Fletcher?

Leigh is certainly great in the central role, capturing the required mix of vulnerability and inner strength necessary for the part [while getting in what seems to be the required scene where she’s violated]. There’s a lot more time than usual, where she is the only actor on screen, and that works better than you’d imagine. However, despite an obvious desire by writer-director Chapman to be Blue Velvet, and expose the seedy underbelly lurking just beneath the surface, he doesn’t have the necessary script rigour to pull it off. Once we establish Carol’s sanity is on shaky ground, it’s hard for the viewer to commit to anything that happens, since you’re unsure whether it’s happening or not. The result is a disconnection which weakens the film so much, that seeing Frank Stallone and his cop friends having a C&W jam session in the police-station, is probably more disturbing, than anything the rest of the movie can deliberately conjure up.