I will confess to finding this kind of urban, low-budget movie curiously addictive, despite – or perhaps, because of – being about as far from the target audience for them as can be imagined. To state the bleedin’ obvious, these are not aimed at middle-aged expat Scots. Even though the vast majority are not very good, to me they are like a document from an alien culture, a glimpse into a world that is both fascinating and (let’s be honest) scary. I’ve reviewed a few over on Girls With Guns, but despite the cover, this one didn’t meet the required quota of action heroineness for that site. So, here we are. This could possibly end up becoming a series, like Chinese animal attack movies. I would not bet on it, however. 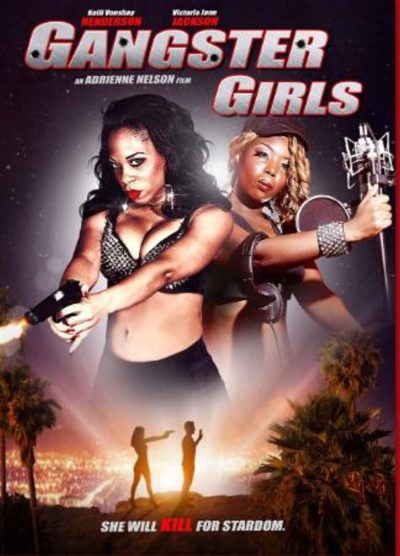 It does hit most of the marks I’ve found common to these modern blaxploitation movies. They’re set “on the streets”, depict a poverty-stricken life from which criminal activity of some kind is typically the only way out, and they’re very heavily influenced by rap and hip-hop music, in both style and content. Here, the central characters are Nina (Vonshay) and Sarayia (Janu, who is also responsible for much of the soundtrack), aspiring rappers with a sketchy sideline in drugging and robbing men in bars. However, they bite off more than they can chew when their latest victim is a courier for local boss Darmarco (Bethel). He’s none too happy: the courier ends up dead, Sarayia takes the fall and Nina a.k.a. “Sunshine” (the movie’s original title, under which it still appears on Amazon) ends up with a record contract. Which is awkward, since Sarayia is the one with the actual talent.

Despite the IMDb-approved date above, the end credits give a copyright date of 2011, and on technical terms, that seems about right. The film generally looks fine when it’s in and around the ‘hood; however, if anything more is required, the production struggles badly. For instance, Sarayia’s “prison” is utterly unconvincing. The plot is another weak spot, with the film never able to find a direction and stick to it. Characters arrive and vanish at random: Sarayia’s cousin Streetz (played, according to the credits, by “The official two man army” – that’s Mr. Army to you) suddenly turns up dead, slumped against a tree. The movie ends with a set of stills informing us of their future fates, as if the makers got bored and drifted off. Or ran out of money.

There are points where the musical influence is so heavy, it feels more like a long-form music video. The community college our heroines attend, have rap battles before class, and Nina’s talent shortage leads to a similar, extended sequence (though I have to say, the rapper called Dirty Flowers was good enough to impress even a non-fan like me). Want more? Stick around after the closing credits for six minutes of bonus footage! And naturally, the soundtrack appears to exist, largely as a vehicle for the producers to shoehorn in a bunch of their pals’ work.

The main positives are performances which feel pretty natural, even if you wonder how far the characters are from the actors. The dialogue often feels improvised – or “made up as they went along” if you’re feeling less kind – which does help enhance the feel of a slice of life from the streets. It did just about manage to hold my attention. Overall though, it is not difficult to tell why it seems to have spent eight years on the shelf.