This combines two of my least favourite things: YouTube celebrities and found footage. I’m not exactly a fan of ghost hunting shows either. Yet, somehow, this works, coming across as an Evil Dead for the social media generation. Okay, it’s not quite at that level, lacking the same degrees of insane invention, and is considerably less excessive. However, it does share a dorky hero, who gets put through the wringer, both emotionally and physically. Considering this is basically two characters in one location for 90 minutes, in addition to my concerns of the first sentence… it works surprisingly well. 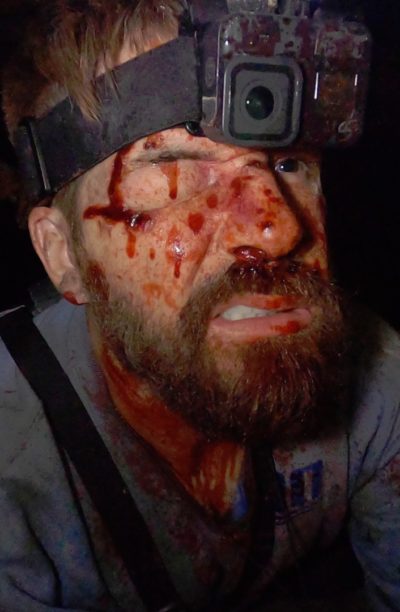 The focus is Internet vlogger Shaun (Winter), who is trying to make his way back after getting cancelled. His schtick involves him facing his fears, and his comeback video is Shaun live-streaming himself spending a night, alone, in a haunted house. He sets up various cameras, padlocks the front door shut and throws away the key, to make sure he can’t leave. There’s a tour of the premises, and Shaun tells the stories which gave the place its reputation. Key to this, is the story of Mildred (Stone), whose ghost still stalks the halls and roons, bringing death and gathering souls. Shaun is increasingly getting freaked out, and matters are not helped by the unexpected arrival of a fan from his channel. Things continue to escalate, with Mildred intent on adding Shaun to her collection. But one advantage of the Internet watching your every move, is that it can provide a very helpful supply  of crowdsourced paranormal wisdom.

The most effective thing here is the pacing. Every time it felt the film had wrung all it could from the situation, a new element inevitably arrived, breathing fresh energy into proceedings.  Shaun being the sole inhabitant of the screen is getting old? Give him a follower to interact with. All corners of the house explored? Expand the horizons. It all feels organic, too, rather than artificially contrived. Even the limited selection of cameras doesn’t get stale, even if it doesn’t play by its own rules i.e. the fixed cameras do not cut in automatically whenever they detect movement, as claimed. The film also perfectly nails the YouTube world, especially in the live-stream comments that fly past, an authentic mix of supportive and trolling. Throw in Shaun’s perpetual concerns about violating policies, and that’s why I laughed out loud, when he prepared to go after Mildred by yelling, “Let’s demonetize this bitch!’

In a rarity for me, I actually watched this on my computer, and that’s its natural environment. I’m not sure it’d be as effective on a cinema or even a TV screen. Those formats might highlight the occasionally wobbly (if admirably practical) effects. There are also a few too many shots of Shaun running and screaming. However, despite his jerkishness, I never quite found myself hating him, even if his “come to Jesus” moment of self-discovery near the end teeters on the edge, before adroitly pulling back. It’s all almost enough to make me a fan of found footage. YouTube celebrities, however, can continue fucking right off.