This is a Wong Jing production, so you know that means you’re in for a wild ride. That can break one of two ways, and even as someone with a greater tolerance for Wong than many people, this isn’t one of his more successful efforts. It’s a slightly lumpy mix of thriller, comedy (naturally!) and soap-opera; the individual parts aren’t bad, they just don’t mesh in the way better film-makers might manage to pull off. I was drawn in by the idea of Anthony Wong playing a cop hunting a serial killer; given his best known movies, it seems almost against the law to have a psycho in your movie that he’s not playing. But that’s a bit unfair, as he’s actually pretty good in any role. 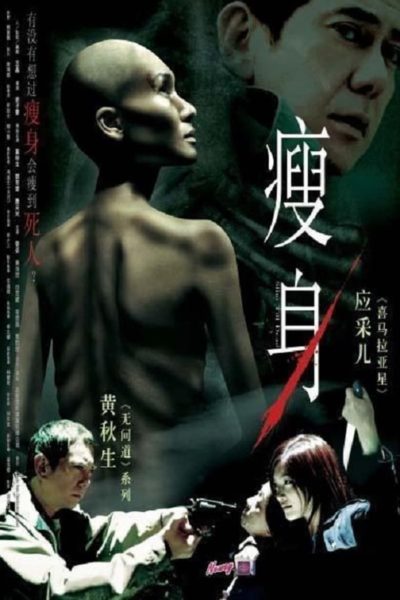 Here, he’s downtrodden detective Sergeant Tak, facing challenges both at work and in his personal life. He just got overlooked for a promotion, and as a result of a previous incident, can’t hold a gun without shaking. Meanwhile, his wife Ling (Tang), an ex-cop herself, resolutely refuses to put out. Why, is one of those things the film never bothers to explain, since it’s mostly played for cheap laughs. It doesn’t make much sense, since Ling clearly does care about her husband. He, however, is largely engaged elsewhere, tracking down a killer who is abducting models and subjecting them to a highly effective weight loss program. By the time they’re done, they weigh exactly 70 pounds. Sure, they may be lacking a pulse. Or legs. That’s a small price to pay, surely?

You get the sense there is an element of social satire here, lampooning the cultural obsession with weight loss, as we as reality television. The victims are involved with a beauty pageant show that is apparently ridiculously popular. We first meet Tak in a hostage situation, where both sides take a pause to find out this week’s winner (even though it’s generally acknowledged the outcome is predetermined). Perhaps related (or perhaps not): the character, played by Wong Jing, who is promoted over the sergeant’s head, is called William Hung. This is the purest example of a “2005 called: they want their reality TV reference back” moment I’ve ever seen. However, the portrayal is probably too broad to be considered “satire”; parody is closer to the mark, since there isn’t much apparent point.

Well, except for the salacious boobs ‘n’ button camera angles from which the bikini-clad contestants are observed. It’s hard to tell if this is commentary, or just Wong Jing being Wong Jing. Mak does bring a certain style to things, drenching the entirety of Hong Kong in a blue neon glaze. And if I can’t say there is much of a surprise when the identity of the killer is eventually revealed, there are just about enough bumps in the road along the way to justify the viewing experience. Wong is worth watching as usual; just don’t expect anything like his peak performances.