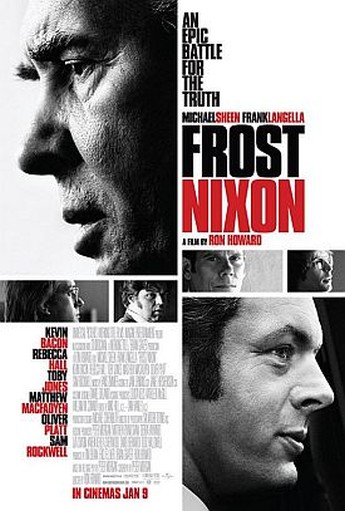 If on somewhat uncertain factual ground, this is none the less riveting. It depicts the historic interview between David Frost (Sheen) and disgraced former American President Richard Nixon (Langella), into which both parties proceed with their own agenda. Nixon sees an easy interview, that will begin the process of rehabilitating his political reputation; Frost conceives of it as an opportunity to become more than the “talk-show host” he is perceived as being. Even getting the two men to sit opposite each other is a fraught process, with Frost struggling to raise the finances necessary to fund the event, in the face of American network and advertiser disinterest. His team, under producer John Birt (McFadyen) are also unconvinced of Frost having the necessary guts and intellectual savvy to be able to pry any admission of guilt from the cautious and introverted Nixon. These doubts seem entirely justified after the first couple of sessions, where the ex-president runs rings around his ‘inquisitor’. Is Nixon going to get the puffball treatment he wants, or can Frost pull things out of the fire?

History shows how this ended – the most famous quote being, “I’m saying that when the President does it, it’s not illegal!” – so I can’t say there’s really any tension generated over that issue. But it still makes for fascinating viewing, even when all you have are the two central protagonists, sitting in armchairs and talking to each other. You can almost see the mental wheels turning as they duel with each other, in a verbal equivalent of a chess-match, and the performances are great; every time I see Sheen, I am more impressed with his talent. Langella is equally as good, capturing the essence of Nixon, a man singularly unsuited for the role in which he found himself. At the end is a telling quote as he bids Frost farewell: “Being liked. Having that facility. That lightness, that charm. I don’t have it, I never did.” The film’s most remarkable success is that it manages to turn Nixon into a human being rather than a monster – horribly flawed, certainly, yet it’s an essential part of what makes him human. A fascinating glimpse into the politics and personalities of a pivotal era in American history.