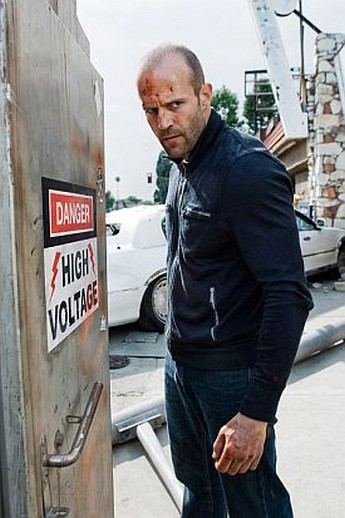 Having not been over-impressed by the original, I was surprised to find myself enjoying this, as a guilty pleasure, even though the hyperactive, ADHD approach from the first film is not only retained, it’s pushed even further. That could be the reason why it works: it’s not the kind of thing at which you can go in any half-measure, and this time around, the lurid style is matched by a ridiculous, excessive, offensive script and characters that fit it perfectly, and the flick is all the better for that. Chev Chelios, last seen crashlanding from the sky, has his heart stolen for a bootleg organ transplant, and replaced by an artificial one with a limited battery-life. He escapes becoming an unwilling organ donor, and sets out to recover his real heart, pausing only to recharge the plastic one, by any means necessary, and that ranges from the old jump-leads on the nipples routine, to the slightly-less expected, rubbing himself up against an old woman at the racetrack. Static electricity, y’see. Yeah. Right.

It is, of course, completely ridiculous, but everyone involved buys into the concept and goes at it with the necessary energy and enthusiasm. Not just Statham, but also Smart as his now pole-dancer girlfriend, with whom he once again has a very public sexual encounter – this time in the middle of a horse racetrack. It’s an apparent complete willingness to go with the insanity demanded by the directors, which keeps this pulsing. I can imagine Statham and Hsu simply nodding, when told their fight sequence would be filmed in the manner of a Godzilla movie, the two of them brawling their way against the backdrop of a miniature cityscape. On more than one occasion, I was reminded of the lunatic brain of Takashi Miike, in the way that anything could happen, and it would still make sense; or, at least, as much sense as anything in this could be said to. I read another review – on a Christian movie website – that called this, “A film so vile, so repugnant and evil that, by the time I left the theater, I felt like crying. I was filled with both anger and deep sadness after viewing it.” Well, I wouldn’t call it that good, but it was certainly fun.