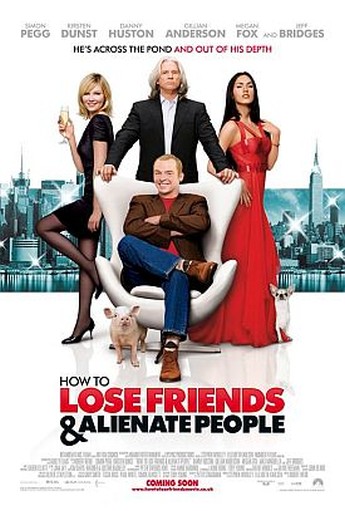 Skating by almost entirely on Pegg’s charm, this is a thinly-disguised adaptation of Toby Young’s memoirs, detailing his attempt to move to America and become a columnist for Vanity Fair. Here, Pegg plays Sidney Young, an acerbic young writer lured to New York and “Sharp’s” magazine, run by a man who sees in Young what he used to be himself. In his new position, Young lusts after an unattainable starlet (Fox), irritates the hell out of his boss (Huston) by a steadfast refusal to follow the standard practices of kowtowing to the publicists, and completely ignores the woman who is so obviously “right” for him, co-worker Alison (Dunst). No surprises where this eventually leads, though it requires Young to get into a fist-fight live at an awards’ ceremony with said starlet, a cokehead actress nominated for her portrayal of Mother Teresa.

It’s never more than completely obvious, “fish out of water” stuff, though has a certain resonance – I remember a time when I would have happily jetted off to New York if, say, Fangoria, had called, and I suspect the results would have been probably no less “bull in a china-shop”, though perhaps less contrived and amusing. As noted, Pegg was the only reason we bothered with this, and that’s the only justification for interest in it. His sense of comic timing helps to balance the tired and over-familiar script, that dusts off all the tired stereotypes of celebrity, New York and publishing. Dunst is never convincing as a tough-nosed writer with a heart of gold, though casting Fox as a dizzy starlet is not a bad idea – the fate of her chihuahua is probably the film’s best scene, thanks to Pegg’s manic face-pulling. Much like its central character, the film really needs to decide whether it wants to be subversive or not: the half-cocked product which results from this indecision is almost-entirely forgettable.