Back in 1999, when the original Deep Blue Sea came out, shark movies were something of a novelty. There had been a brief flurry of imitators in the wake of Jaws, naturally – not least the ever-declining return of its own sequels – but by the end of the nineties, there was barely a ripple to be seen. DBS, therefore, came across as something fresh and original: if for nothing else, the one scene everyone in it remembers, where Samuel L. Jackson gives a stirring speech, rousing his colleagues to fight on… while standing suspiciously close to the facility’s wet entry pool. Say no more. 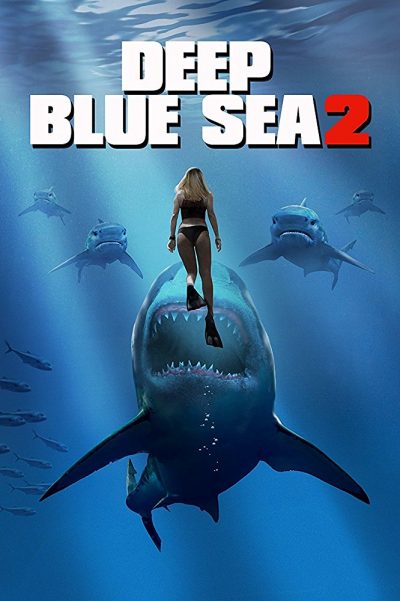 You can argue whether it’s good or bad, but Renny Harlin has a lot to answer for, because DBS is one of the foundation blocks upon which the subsequent cinematic sharkpocalypse has been built. Aspects it pioneered, have since become almost compulsory, for example, sharks that are super-powered in some way or another (strength, speed, quantity of heads, etc.) and a story built around spectacular tent-pole character deaths. There’s a case to be made that, without Deep Blue Sea, there would be no Sharknado 5. On the other hand, without Deep Blue Sea, there would also be no Deep Blue Sea 2.

Taking 19 years to come up with a sequel is the very definition of being late to your own party, especially when others have stepped in to fill the oceanic void in your absence. Matters are not improved when you don’t so much build on your predecessor’s foundation blocks, as shuffle them around a bit, and replace a few with polystyrene imitations. I mean, as well as Jackson, the original included the likes of Thomas Jane, Michael Rapaport, Stellan Skarsgård and Saffron Burrows. The sequel? Literally no-one we had heard of. We’d have forgiven them if they had even brought LL Cool J in for a cameo.

Given this, the opening credit of “Based on characters by Duncan Kennedy, Donna Powers and Wayne Powers” doesn’t make much sense. There’s no-one returning from the first film, and I’m presuming they don’t mean the sharks, not least since they’re a different species here (bull rather than mako). This lends credence to the idea that the script here was actually written by taking the script of the first and doing a global search/replace on character names. Because if this wasn’t a sequel, it would surely be a plagiarism lawsuit in the making.

Both take place in a remote facility, doing medical research of a dubious kind involving sharks. Both are overseen by a black executive – here, billionaire pharmaceutical company owner, Carl Durant (Beach). Things go wrong, escape becomes impossible, and the dwindling band of survivors have to make their way through an increasingly moist and toothsome environment to escape. Both even have that moment by the entry pool, where someone gets eaten at an “unexpected” moment: quotes used advisedly here, since you’re waiting for it to happen in the sequel.

Where the two films differ is in the execution. Harlin was one of the action directors of the nineties: he also gave us Die Hard 2, Cliffhanger and his double-bill of “Let me employ my wife” films, Cutthroat Island and The Long Kiss Goodnight, both of which are much better than their box-office bomb status would imply. He would lose his way thereafter, but proved with Deep Blue Sea that he didn’t need Geena Davis to navigate action on the high seas. It’s a slick ride, which has stood the test of time; the kind of film you can stumble across on cable and dip into for half an hour, safe in the knowledge you will be entertained. 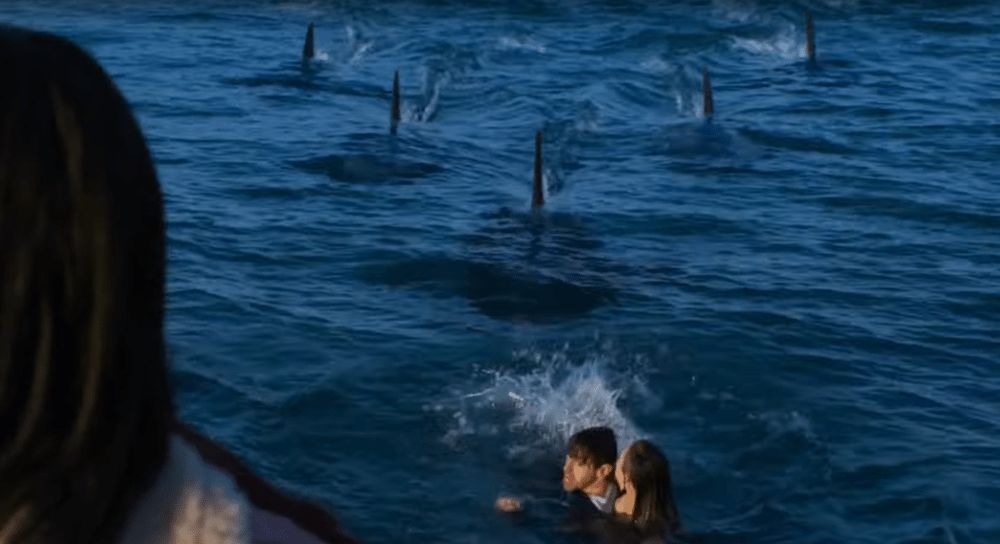 The sequel, on the other hand, is directed by someone with no apparent experience in the genre. According to the IMDb, White’s last feature was something called Megachurch Murder, which hardly seems like a show-reel for Deep Blue Sea 2. Unless, of course, the murders at the ecclesiastical establishment were actually committed by sharks, lurking in the baptismal font. [Cut to David Michael Latt of The Asylum making furious notes] The lack of experience shows, in the way things happen, and you can see that they are clearly intended to be exciting or generate tension – only, it doesn’t happen. It’s all incredibly flat. You are never given any reason to care about any of the characters, so why are you going to be concerned when they are put into peril?

Not helping matters is the questionable science. We’ve noticed and mocked the ludicrous way sharks from the lower-quality entries in this genre growl and roar, since at least 2005. It happens in spades here – and not just the adults either. One of the main plot points is how Mummy Shark gives birth to a whole litter of little ‘uns, who can pursue the cast where the larger sharks can’t fit. They squeak in a way that would be adorable, if it wasn’t for the whole “turning the water crimson” thing they do. Durant’s motivation for his work is little better. He’s worried that computers are going to outpace human intellect, and will then dispose of us. The leap from this dubious concern to “Let’s genetically engineer super-intelligent sharks” is never adequately explained.

Then there’s the shark remote control. Literally. Durant demonstrates his power to new arrivals by tossing an employee into a shark-infested pool, and just when they’re about to tuck in (above), said device and its one button is wielded, causing the sharks to swerve away in perfect formation, like the Red Arrows. This feels like it should be a key plot point. Don’t worry. It isn’t. Which is a shame. Because if I had a device that could control sharks like that, I would be exploiting the fuck out of it. BZZZZT “Shark! Bring me a beer!” That the film doesn’t, is testament to its woeful lack of imagination. This is why the official sequel ends up being considerably less entertaining than all the bastard children to which Deep Blue Sea has given birth over the years.