Part of low-budget film-making is cutting your coat according to your cloth. If you can’t afford stunts, special effects or other expensive aspects of production, don’t pick a script which uses them. The makers here get that right: this is basically a two-hander, set in a single location. It’s clearly intended to fit the resources available, and as such, avoids the common pit-fall for the field, of over-reaching ambition. This looks and sounds entirely adequate – the makers even got some help from the weather, with it reportedly being shot during the worst storms the UK had experienced in two decades. Who needs CGI lightning? Unfortunately, neither the script nor the performances are quite enough to elevate it above the low bar of “adequate.” 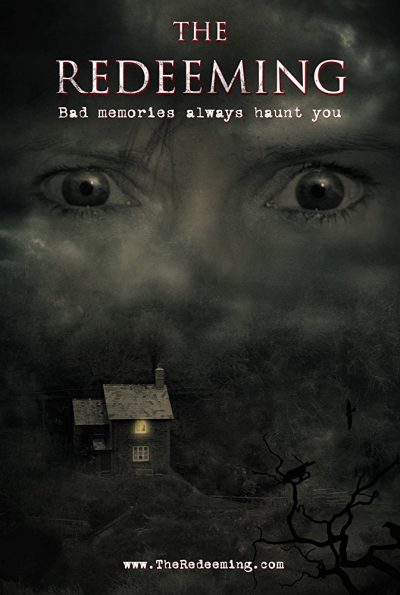 Joyce Hadley (Wood) enters a remote cottage as a storm descends. Shortly thereafter, there’s a knock on the door. It’s a young man (Wichert), requesting help for his injured arm. Reluctantly, she lets him in to take shelter, and the power goes out soon thereafter. As the two talk, it gradually becomes clear that neither may quite be what they seem. Joyce, for example, is strangely unfamiliar with the cottage, and the young man – who gives his name as “John Simons” – might not be as hurt as he claims. Over the course of the ensuing hours, as the lights go off and on, the pair verbally fence, until the truth is finally revealed.

When you find out the real situation, it manages to make logical sense, while still feeling like a unsatisfying cheat at the same time. The same goes for the frequently-awkward dialogue: you could argue that its unnatural and artificial manner is an intentional result of a situation which… well, let’s just say, is indeed unnatural and artificial. It’s not as if these are two people comfortable in each other’s presence, their proximity being the result of necessity, not choice. Yet this doesn’t make their conversation sound any less stilted or clunky on the ear. Ditto with regard to the performances: I was never able to shake the perception that I was watching Actors Performing Roles [caps used advisedly], even though there’s a plausible case you’re watching characters performing roles.

It never becomes a true chore to watch; given the limitations of the chosen structure and resources, that’s something of a laudable achievement. However, it’s not enough. Smaller-scale productions like this can work perfectly well, but their margin for error in other areas tends to be smaller. Especially in something as chatty as this, they need to step it up in particular when it comes to the story, and the interpretations need to nail it as well. Both those elements here fall some way short of the necessary level, and the end result, while laudable, comes up short of impact. The twists are more likely to provoke a desultory shrug, rather than any gasps of shock – and that’s not a consequence of the budget.