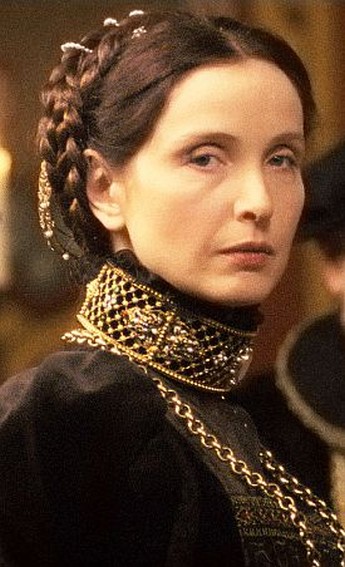 Significantly better than Bathory, in part because this maintains a better focus on the central character. It’s only a few minutes before Countess Bathory (Delpy) has been born, grown-up, married and widowed, and is left to run the most powerful estate in Hungary – her decision to do so, rather than appoint a guardian, raises eyebrows. Count Thurzo (Hurt) proposes marriage; she rejects the offer, but falls for his son, István (Brühl) instead. Jealous of his son’s success, the Count sends him off to Denmark and intercepts his letters to Bathory, leaving the Countess believing István had dumped her for someone younger. An upset Bathory swats a maid after having her hair accidentally pulled: drops of blood splatter onto her skin, and the Countess believes it has a positive effect, making her look younger. Most of her employees are too scared to debate, except her most trusted advisor and occasional lesbian lover, Darvulia (Marinca), and her objections get her thrown out. Hmm… Distraught woman, desperate to keep her looks, and convinced that the blood of virgins can do just that. What can possibly go wrong?

This seems to have been something of a labour of love for Delpy, who directed, wrote, starred, produced and composed the music for this, and it’s her really solid performance at the core that anchors this. While not exactly soft-pedalling the brutality, it’s more of a tragic love-story than anything else. Bathory is prepared to do absolutely anything to keep István’s interest, and it’s this that dooms her – in particular, the king only pays attention, after the Countess graduates from snatching local peasant girls to those with more influence. Here, Thurzo is more an opportunist, who sees the change to snatch her land, under the guise of “protecting the family name.” Each of the angles here gets a fair shake, but the most important thing is, you get a lot better sense of the human being behind the bloodsucking legend. The success in this angle is what ultimately makes it work, where Bathory largely failed.

[The one I really want to see, however, is The Blood Countess, starring Tilda Swinton, Isabelle Huppert and Udo Kier, supposedly in pre-production. If that comes to fruition, maybe I’ll revisit the theme and look back at some of the older versions of the story too.]