After discovering the mutilated body of one of their colleagues, a small team of police launch an attack on a supposedly abandoned high-rise block where the gang of criminals responsible are holed up. The assault misfires and they are captured by the perps, who start killing off the cops. However, the corpses start coming back to life, fast, strong and a bit bitey. Turns out that the problem is not confined to the apartment block; there’s glowing lights in the distance, and it seems that a similar issue is affecting the entire city. For now, however, the characters here have to focus on getting out of their current predicament, and thus is born, of necessity, an uncertain and fragile alliance between the forces of law and their targets. Will it hold up long enough to get out of the building? And it it does, what happens then, to those who survive? 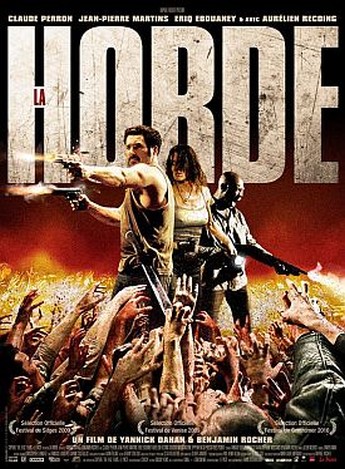 This French entry in the zombie genre doesn’t bother with much in the way of set-up or explanation: it’s mostly about people trying to cope in the face of the unimaginable. Though human nature being what it is, the living are often more of a threat than the recently-deceased, with cop Ouessem (Martins) and criminal Adewale (Ebouaney) each having to deal with dissent in their respective ranks. Things unfold largely at a breathless pace, and it’s a pretty “hardcore” – to use a term mentioned more than once in the movie – approach, with these zombies taking a lot to put them down. This is most notable in one scene in a kitchen, where one of the cops, Aurore (Perron), has to brawl hand-to-hand with one of the undead. Let’s just say, a refrigerator comes into play. Conversely, there’s another great scene with someone on top of a car, fighting off, literally hundreds of zombies, and both sides just won’t give up.

I have some issues with the script: given the circumstances, it seems unlikely the police would send a mere four cops in to the building, and it’s never explained why so many zombies gravitate to a building with so few living people in it. I’m also not too happy with the ending, which is telegraphed a mile off, and leans far too heavily on the original Night of the Living Dead. However, as a lean, mean genre entry, it does the job nicely, drawing the characters efficiently, in a few short brush strokes, and then getting on with the horror and action, which is exactly the way it should be done.